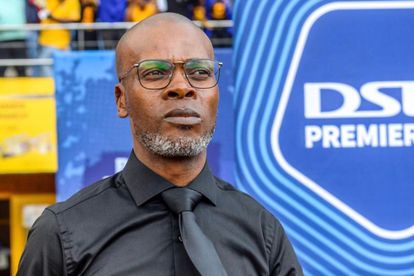 ‘10111’ was appointed as the Glamour Boys’ head coach at the start of the current season following the sacking of Stuart Baxter and his era hasn’t started well with the club currently sitting in 14th place in the DStv Premiership standings.

Khanye, who is now a football pundit, says Pitso Mosimane is the right man to bring Kaizer Chiefs to life.

‘HE IS ONE FOR THE FUTURE’ – KHANYE ON ZWANE

“Pitso does his talking on the field. He identifies and signs his own players, he does his scouting and is in charge of development and also brings his entire technical team,” said Khanye in an interview with Sunday World.

“He is the right man for the Chiefs job, he is around and he is available. We have seen what he has done at Mamelodi Sundowns, he brought his own philosophy, he brought players from South America and also from Africa – players that were of a higher standard.

“Pitso is the right man for the big task of reviving Chiefs, and Arthur still has a lot to learn. Arthur needs to go back and work for some time in the development structures. He is one for the future, but definitely not now.”

“Look where they are on the PSL table. Marumo Gallants dominated them this past Sunday and the Chiefs equaliser was as a result of luck from Zitha Kwinike. People said they signed the best players, but I do not agree.

“Yussuf Maart, Kgaogelo Sekgota and Zitha Kwinike – if they are the best – why were they not promoted from their former clubs, including at Chiefs where they started?

Khanye added that Chiefs should bring back Farouk Khan who was previously working as the club’s Head of Youth Development and produced several players who went on prosper in the first team.

“The players that they [Chiefs] have brought from their development, like Nkosingiphile Ngcobo, Happy Mashiane, Njabulo Blom and others are not making much of an impression. Chiefs must also bring back coach Farouk Khan as the head of development, he understands the mentality of the club,” Khanye added.

“He produced players like Jabu Mahlangu, Isaac Mabotsa, Nhlanhla Khubheka, the late Lucky Maselesele and Gerald Sibeko. Those were good players and they delivered for Chiefs.”