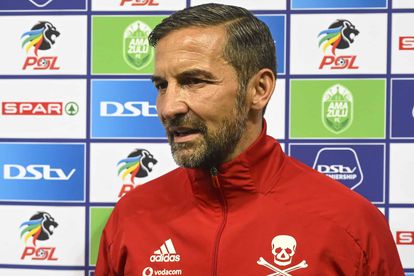 Orlando Pirates could be without coach Josef Zinnbauer for the midweek assignment against Bloemfontein Celtic, following the German’s revelation that he was granted leave to return home.

The 50-year-old took charge of the Buccaneers in December 2019, taking over from caretaker coach Rhulani Mokwena, and went on to guide the club from mid-table to a respectable third-place finish in what was a tough season for the club.

Ahead of the emphatic 3-0 victory against bitter rivals Kaizer Chiefs, the German mentor revealed that he would be taking a flight out of South Africa soon after the final whistle.

According to Zinnbauer, a family emergency has prompted his departure, and he has received blessing from club chairman, Dr Irvin Khoza.

“Before I come to the game, I have to say thank you to the chairman,” he told SuperSport before the game. “I have an emergency in my family and thank you I can go home after the game to my family.”

How the German has fared at Orlando Pirates

Zinnbauer was relatively unknown to the South African public prior to taking the hot seat at one of the country’s biggest clubs.

Following a stalemate against Bloemfontein Celtic, he guided the Buccaneers to a six-match winning streak in the league, interrupted by a penalty shootout defeat to Bidvest Wits in the first round of the Nedbank Cup.

In 22 matches in charge, he has registered 12 victory, including one each against Pirates’ biggest rivals, Chiefs and Mamelodi Sundowns.

Signing off in style

While Zinnbauer did not divulge whether or not he would return to his post, he has left the Pirates faithful on a high, following victory over Kaizer Chiefs.

In an MTN 8 semifinal clash at Orlando Stadium, Zakhele Lepasa, Vincent Pule and Thembinkosi Lorch all netted to hand the Buccaneers a healthy advantage going into the second leg of the tie at FNB Stadium next Saturday.

The result was the perfect revenge, following his first taste of the Soweto Derby, where Lebogang Manyama’s strike was the difference between the two rivals.

Assistant coach Fadlu Davids will likely be in charge against Celtic on Wednesday night. The game kicks off at 19:30 (SAST).