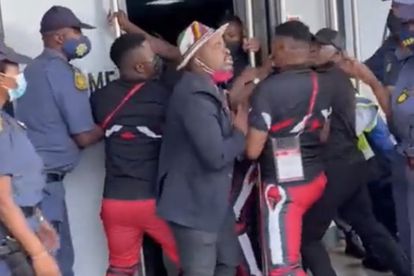 A screenshot of the incident involving Tim Sukazi.

A screenshot of the incident involving Tim Sukazi.

Pirates were formally charged for denying Tim Sukazi entry at Orlando Stadium towards the end of 2021. Sukazi claimed he had ‘all-access’ accreditation, and as per the video that did the rounds at the time, the club boss was seen showing the police and security stewards the accreditation, but a controversial altercation followed as he was denied entry.

Pirates have since learned their fate, with the PSL DC finding that Bucs brought the “game into disrepute” and both parties deliberated on 3 May regarding the sanction, which has now been handed down.

“Having been found guilty last week, the disciplinary committee considered both parties’ submissions with regard to their appropriate sanctions,” PSL prosecutor Zola Majavu stated.

“And the DC ruled as follows. One, Orlando Pirates were fined a monetary amount of R100,000, which is wholly suspended for the period of 12 months on the condition that during the period of suspension, they are not found guilty of the same offence again.

“Two, they were also ordered to pay the cost of the DC hearings for approximately four sittings and it would be administratively computed by the league and sent to Pirates for payment,” he continued.

“Third, they were further directed to send a written apology to the league. In that apology, they need to recognise that they have brought the league, the game, Safa, Caf, Fifa and the sponsors into disrepute in a manner in which their officials manhandled Mr Sukazi.”

Pirates had initially pled not guilty, but the disciplinary hearing into the case – set to be heard on 26 January – was then postponed due to media officer Thandi Merafe being in Cameroon at the Africa Cup of Nations.

Sukazi, who is a lawyer by profession, has prevoiusly said Pirates need to accept responsibility for what happened.

“We are monitoring the situation with keen interest,” Sukazi told SunSport.

“If Pirates are found guilty, they should lead by example, show leadership, and own up to their conduct. They must issue a public apology to the fans and TS Galaxy.

“It is a terrible incident, and we look to Kaizer Chiefs, Mamelodi Sundowns, and Pirates as the smaller teams. We did not expect them to behave in that manner,” he added.

Sukazi also added that he would be consoled “if they are found guilty and charged for what they did.

Madrid stew: Hearty beef stew for any occasion with your family