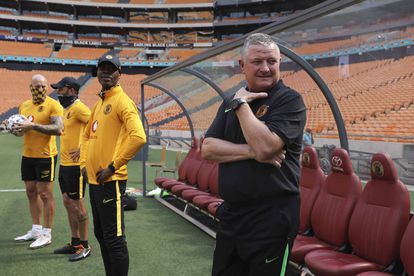 Kaizer Chiefs are in search of some consistency in the new season, and their pursuit takes them to Sugar Ray Xulu Stadium for a clash against Golden Arrows.

Amakhosi have a single strike to show for their efforts in the league in the early stages of the campaign, and it came in the form of an own goal in their sole victory so far.

Hamstrung by injuries and the inability to bring in new players due to a Fifa ban, finishing has been a significant problem for Gavin Hunt’s men, who languish at the bottom half of the table.

The former Bidvest Wits mentor is, however, still banking on who he has in his squad to deliver the goods, eventually.

“We’ve still got some good players here, so we need to get them back [from injury] and get them all playing again. The first couple of games, we haven’t really had much to pick from in certain areas,” said Hunt. “So, it’s been pretty much playing people here and there. Obviously the biggest blow is up front, as we all know, but we just keep going and I think there’s no two ways about it, we’ll get better. We have to get better, that’s for sure, and we will get better.”

Arrows, on the other hand, are still unbeaten after rallying late to salvage a draw against the in-form Baroka in their last outing.

For Abafana Besthende, the fixture is another encounter against a side they have battled against since their ascent into the top flight.

In 38 matches between these two sides, Chiefs have won the overwhelming majority, claiming 20 victories to Arrows nine.

The Soweto giants have also been the dominant side in the Durban outfit’s backyard, registering nine away wins, while their opponents have managed just five wins on their own turf.

Chiefs completed the league double over Arrows last season, winning 2-0 at home before edging them 1-0 in the reverse fixture.

In the last decade, Abafana Besthende have registered just two wins over the Glamour Boys, both coming in 2018.

The match between Golden Arrows and Kaizer Chiefs kicks off at 15:30 (SAST) and will be broadcast live on Supersport’s Premier Soccer League channel (202).