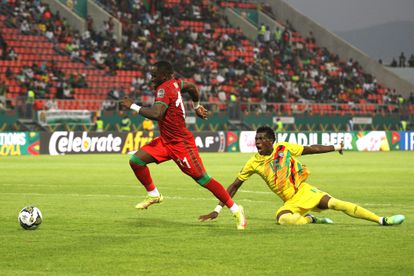 Gabadinho Mhango of Malawi on the attack during the 2021 Africa Cup of Nations Afcon Finals football match between Malawi and Zimbabwe at Kouekong Stadium in Bafoussam, Cameroon on 14 January 2022 ©Shaun Roy/BackpagePix

Gabadinho Mhango of Malawi on the attack during the 2021 Africa Cup of Nations Afcon Finals football match between Malawi and Zimbabwe at Kouekong Stadium in Bafoussam, Cameroon on 14 January 2022 ©Shaun Roy/BackpagePix

Former Bucs striker James Mothibi believes that national team duty at the 2022 Africa Cup of Nations (AFCON) will be of benefit to Gabadinho Mhango and Orlando Pirates.

Mothibi said that he had been disappointed with what Mhango has delivered this season, and feels the Malawi forward needs to adjust his mindset.

Gabadinho Mhango has been red-hot at AFCON so far and should bring that rich form back to the Sea Robbers camp.

The former frontman said that Orlando Pirates shouldn’t be in a hurry to offload Mhango despite his recent struggles.

“When Mhango signed for Pirates, I saw him as someone who was going to assist the club to move forward but the only concern that I had about the boy and not necessarily a problem was his attitude towards to the game,” Mothibi told Soccer Laduma.

“I’m not talking about the attitude towards coaches or the team but to himself and his family and the football fraternity.

“There is a positive attitude and a negative attitude but I do suspect that the management must have called him to warn him that he is not bigger than the club.

“I still regard Mhango as a good player and I liked him from the very first day he arrived at Orlando Pirates because of the work-rate I saw from him from Bidvest Wits and from his national team.

“It was a good call for Mhango to get the national team call up for him to go and get game time as that will assist Orlando Pirates to have a second look at him.

“If they were thinking about letting him go, I think they must think twice and have patience with the boy.

“These boys do sometimes go off the rails and it is our duty as former players and management to get them back on the right path by motivating them. Pirates is a big club and the boy should acknowledge that he has made mistakes and be grateful that there are people who are giving him a second chance,” he added.