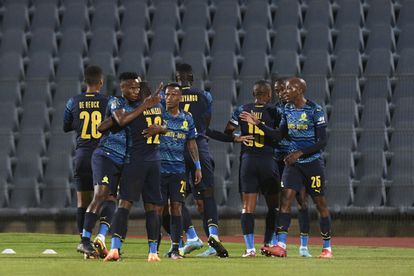 There was another shake-up in the DStv Premiership standings after Tuesday and Wednesday’s midweek matches. Photo: Twitter @OfficialPSL

There was another shake-up in the DStv Premiership standings after Tuesday and Wednesday’s midweek matches. Photo: Twitter @OfficialPSL

There was another shake-up in the DStv Premiership standings after Tuesday and Wednesday’s midweek matches.

At the top of the log, Mamelodi Sundowns took another step towards a fifth consecutive title when they beat Swallows 4-2 away from home, thanks to a hat-trick from star Namibian striker Peter Shalulile.

Royal AM continued their impressive form in beating Marumo Gallants 2-0 and have strengthened their hold on second place – and a potential CAF Champions League spot next season.

Third-placed Kaizer Chiefs were held to an embarrassing goalless goal at home by lowly TS Galaxy in a result which surely must raise questions regarding coach Stuart Baxter’s future at Naturena.

Cape Town City FC have hit a rich vein of form and that showed again in their 1-0 away win over Maritzburg United which all-but secured the Citizens’ MTN8 spot next season.

But Eric Tinkler’s men will want more than that and a CAF berth, perhaps in the CAF Confederations Cup, is certainly not out of the question.

WATCH | Jali says it’s all over, Mamelodi Sundowns are the champions!

Orlando Pirates also kept their chances of African football next campaign alive as well with a 1-0 win over Sekhukhune United.

Stellenbosch FC won for the first time this year when they beat Golden Arrows 2-0, while AmaZulu won their first match without Benni McCarthy at the helm when they edged Baroka FC 1-0 deep into extra time.

In the other result in midweek, SuperSport United and Chippa United played to a 1-1 draw.