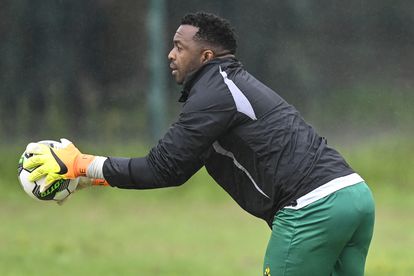 The Amakhosi duo are part of the 26-man squad for Warriors in the DStv Compact Cup which gets underway on Saturday, 22 Janaury 2019.

Warriors take on Amabutho in the second semi-final at Durban’s Moses Mabhida Stadium, and Khune will be in the starting line-up with Bvuma on the bench as his deputy.

Now, with all the four teams still yet to reveal their official kits for the DStv Compact Cup tournament, Khune was smart enough to get his fans talking on social media.

He shared a picture of him and Bvuma in a white Warriors training kit – interestingly, Khune is wearing the No.1 jersey with the latter taking his usual No.16 jersey.

KHUNE SET FOR RETURN IN AFTER 158 DAY ABSENCE

In fact, come Saturday, Khune would have not played competitive football for 160 days prior, but Thursday, 20 January 2022, marked 158 days since he kicked a ball.

The last time Khune kicked a ball in a competitive match was when he featured for Chiefs in the MTN8 quarterfinal against Mamelodi Sundowns.

And that was on 15 August 2021 where Chiefs, despite their gallant second half performance to come from two goals down and draw 2-2 after extra time, lost to Sundowns on penalties.