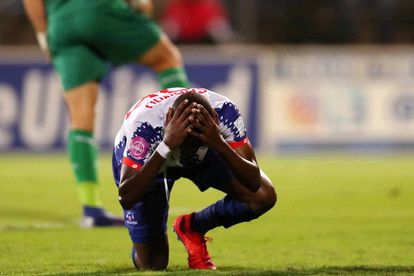 Bandile Shandu of Maritzburg United reacts after scoring a own goal during the 2019 PSL season. Photo: Muzi Ntombela/BackpagePix

Bandile Shandu of Maritzburg United reacts after scoring a own goal during the 2019 PSL season. Photo: Muzi Ntombela/BackpagePix

Bottom club Maritzburg United recovered from conceding an own-goal to snatch a 2-1 stoppage-time victory over AmaZulu on Friday in the PSL.

Bandile Shandu headed a cross into his net on 45 minutes to give visiting AmaZulu an undeserved half-time lead at Harry Gwala Stadium in eastern city Pietermaritzburg.

But persistent second-half Maritzburg pressure paid off after 76 minutes when Fortune Makaringe forced the ball over the line in a goalmouth scramble.

The match-winner came two minutes into additional time with a deep cross headed back across the goalmouth for substitute Judas Moseamedi to fire home.

A third league win in 22 matches offered United hope that they can dodge the drop although second-last Free State Stars have a two-point advantage and two games in hand.

“It would have been an injustice had we not won,” said recently appointed Maritzburg coach and former South Africa midfielder Eric Tinkler.

“We should have been four goals ahead by half-time instead of one goal behind through a self-inflicted wound.

“Our supporters were phenomenal tonight, but I wish they would take note of the kick-off times and be in stadium from the start instead of arriving late.”

The bottom Premiership club after 30 rounds are relegated and the club immediately above them go into play-offs with two second division sides for one Premiership place.