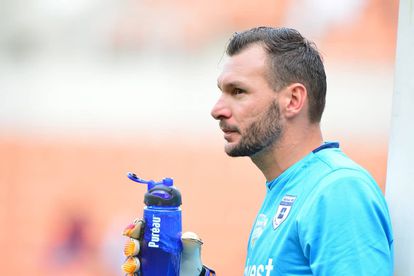 The Citizens signed the 32-year-old Bafana Bafana shotstopper from Cape Umoya United ahead of the 2021/22 DStv Premiership season. following the departure of Peter Leeuwenburgh.

Alas, Keet will now reportedly be watching from the sidelines for as long as SIX months.

Tinkler said according to IOL: “Darren Keet has a long-term injury and will be out. He tore a muscle in his thigh. He will be out for six months.

“It is an injury he sustained at his previous club.”

Marques will battle Bongani Mpandle for the starting berth in goal for the Mother City club.

Tinkler said at the time of Marques’ unveiling that: “Hugo brings a lot of experience. He’s played over a 1000 games. He is a good leader, he speaks English, he is a good communicator.”

Cape Town City will next be in action in the MTN8 quarter-finals against AmaZulu on Sunday, 15 August at 18:00.

The Citizens will kick off their 2021/22 DStv Premiership campaign at home against SuperSport United on Saturday, 21 August at 17:00.