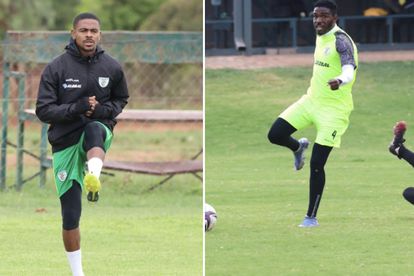 The news was confirmed by Baroka on social media, with the club wishing the duo well in their “future endeavours”.

Baroka are currently dwelling down in 13th place on the DStv Premiership standings, level on just 13 log points with last-placed TS Galaxy.

READ | WHERE WOULD SIYETHEMBA SITHEBE FIT IN AT KAIZER CHIEFS?

Mphahlele insists that Baroka are looking to invest in youth and give young players first team opportunities.

BAROKA NOT IN FOR KEKANA

“Nothing is happening between us and Hlompho Kekana, we’ve never spoken to him or anything, it just rumours nothing else,” Mphahlele told Soccer Laduma.

“But as a Limpopo legend we would welcome him anytime and if he is open to join us we will definitely take him anytime, who can say no to Hlompho?, we will take him if there’s a chance.

“We’ve promoted two youngsters, they are both 17-years-old, they’ve been travelling with the club since December. Kabelo Kgosidsile and Thabang Moabelo. They very good, Kabelo also represented national under 17 team.”