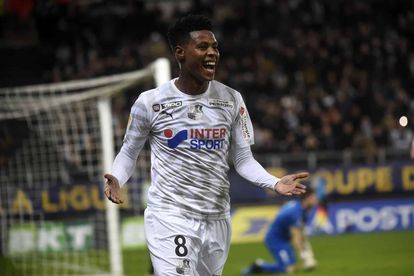 Amiens’ Bongani Zungu (C) celebrates after scoring a goal during the French Cup League football match between Amiens and Rennes on December 18, 2019 at the Pierre Licorne stadium in Amiens. (Photo by FRANCOIS LO PRESTI / AFP)

Amiens’ Bongani Zungu (C) celebrates after scoring a goal during the French Cup League football match between Amiens and Rennes on December 18, 2019 at the Pierre Licorne stadium in Amiens. (Photo by FRANCOIS LO PRESTI / AFP)

Bafana Bafana star Bongani Zungu has landed himself into major trouble in Europe, once again!

Zungu had just recently returned to the Amiens first team however he did himself no favours after picking up a shocking red card over the weekend.

Watch the incident involving the Bafana Bafana star on the following link:

Bongani Zungu slammed by his coach!

Zungu picked up two yellow cards in quick succession and his coach placed the entire blame for their defeat on the 29-year-old midfielder!

“Anger? The word is weak, I am misunderstood. It reminds me of the game against Nancy, having a red out of play while leading 1-0,” Hinschberger said, as quoted by Le 11 Amienois regarding Bongani Zungu’s red card.

“It’s a game we could have won without a hitch, we even had the ball and could have made it 2-0 through Chadrac [Akolo]. The red card is abnormal and everything is summed up in these two turning points of the match.

“I don’t want to attack the referee who was pretty good, the fault is entirely on Bongani Zungu. I’m neither in his head nor in his body but he got the card. We shot ourselves in the foot, we can say that we scuttled ourselves.

“But two facts put an end to our very good first half. A head-to-head loss [Akolo’s chance] at the hour mark which would have allowed us to lead 2-0 and at the end of the match, what can we say about the unacceptable attitude of Bongani Zungu?

“After verbal exchanges with the referee, he collects a yellow card, then persists in his aggressive attitude. Sanctioned by a red card, he abandoned his teammates to ten for the last twenty-five minutes.”

The loss leaves Amiens in 11th place with just 33 points from their opening 27 matches in the French second tier.

According to reports Bongani Zungu is likely to leave Amiens at the end of the season with Kaizer Chiefs one of his potential suitors!