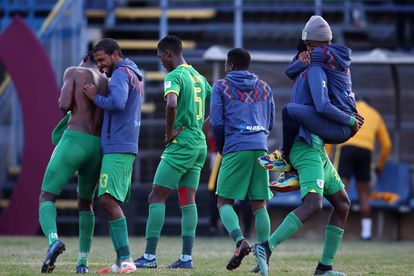 Baroka players celebrates during the Absa Premiership 2019/20 match between Kaizer Chiefs and Chippa United at the Bidvest Stadium, Johannesburg on the 05 September 2020 ©Muzi Ntombela/BackpagePix

Baroka players celebrates during the Absa Premiership 2019/20 match between Kaizer Chiefs and Chippa United at the Bidvest Stadium, Johannesburg on the 05 September 2020 ©Muzi Ntombela/BackpagePix

The first Limpopo derby of the new PSL season is upon us, with Black Leopards taking on the high-flying Baroka at Thohoyandou Stadium on Tuesday night.

The match is of two fixtures scheduled for the day, with Chippa United and Kaizer United also battling it out at Nelson Mandela Bay Stadium .

The fixture comes just after Lidoda Duvha were taught a lesson in their opener, failing to get on the scoresheet against Supersport United, who ran off 2-0 winners at Lucas Moripe Stadium.

Having only just escaped relegation in the previous season, they will be aiming for a much better showing this time around.

It will not be as easy, against a side fresh off victory over the more-fancied Maritzburg United.

Richard Mbulu and Nhlanhla Mgaga scored the goals for Bakgakga, with new signing Jose Ali Meza on the money for the Team of Choice.

Their opponents are yet to find the net in the new campaign, something that has been compounded by the loss of their main goal-scorer Mwape Musonda, who departed in the off-season.

The two clubs have only met four times in league football, with the spoils shared evenly at two apiece.

Baroka will have the freshest memories of victory going into the clash, with both their wins coming last season. This was fitting revenge, as Black Leopards scored a league double in the two sides’ only top-flight league campaign together.

The big news in the Leopards camp is that newly appointed head coach Patrick Aussems has received his work permit and could be on the dugout against Baroka.

The Belgian national was not part of proceedings when Lidoda Duvha lost to Matsatsansa last weekend.

The match kicks off at 19:30 and will stream live on Supersport.

Ramaphosa mourns the death of multiple children in KZN accident