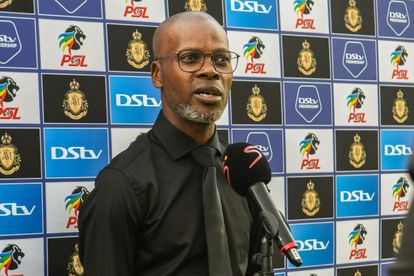 Zwane on why Chiefs switched to back three. Image: Backpage Pix

Zwane on why Chiefs switched to back three. Image: Backpage Pix

Chiefs were outplayed by Cape Town City who defeated their visitors for the first time ever at home, playing at a slippery Cape Town International Stadium.

Having opted to start the season with a back four, eyebrows were somewhat raised when Chiefs coach Arthur Zwane resorted to playing a formation that featured three centre backs, alongside two wing-backs. A move that was supposed to counter Cape Town City and give the visitors great impetus going forward, seemed to somewhat back fire.

It didn’t take long for Cape Town City to break the deadlock as Darwin Gonzalez found himself at the right place, at the right time with a back post finish, after Siyabonga Ngezana got in the way of keeper Brandon Petersen as early as the fifth minute. One of the rare live-wires for Chiefs in the past three weeks, Kgaogelo Sekgota continued in the same vein as he got the better of the very chances Amakhosi had in both halves.

The switch to a back three allowed Ngezana to come in along side the weekend’s starting duo of Njabulo Ngcobo and Zitha Kwinika. The trio did not seem to be on the same wavelength at all, and were exposed in the air for the hosts second, when Democratic Republic of Congo international Nathan Fasika being on hand to head in the all important goal that seemed to take the game beyond the reach of Chiefs.

Speaking to Supersport after the game, Zwane revealed that the change to a back three was made my Chiefs after they had analysed how Cape Town City plays.

“We actually planned for this, you know? The only thing we didn’t do right is to actually execute the plan. We knew that they (Cape Town City) wanted to drop the ball behind (Chiefs defence) and that is why and that is why we came with three defenders so that they can close those spaces and the wing-backs can confront their full backs.” Zwane explained.

Chiefs will now head to Stellenbosch FC for their MTN 8 Cup fixture on Sunday evening and it will be interesting to see if there will be any selection repercussions.