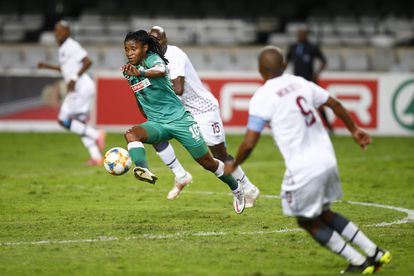 Siyethemba Sithebe of AmaZulu during the DStv Premiership 2020/21 game between AmaZulu and Swallows FC at Kings Park Stadium in Durban on 2 June 2021. Photo: Steve Haag/BackpagePix

Siyethemba Sithebe of AmaZulu during the DStv Premiership 2020/21 game between AmaZulu and Swallows FC at Kings Park Stadium in Durban on 2 June 2021. Photo: Steve Haag/BackpagePix

Sithebe has been heavily linked with a move to Kaizer Chiefs with some reports suggesting the deal is already complete.

However, while Sithebe is free to sign a pre-contract with another club he may not complete a move in January without the express permission of Amazulu.

Amazulu won’t let their stars go without a fight

Chairman Sandile Zungu is keen to keep all three players at the club and hopes to complete talks with the players before the end of January.

All three players are in the last six months of their contracts and can talk to other clubs about a move at the end of the season but are deemed to be too important to let go.

DStv Compact Cup: The 4 team COACHES have been announced!

A source has told Soccer Laduma that all three players are aware that the club wants to keep them in Durban, however, it remains to be seen if they stay at Usuthu.

“The club is not planning to let go of any of their key players. I can tell you Sithebe, Mothwa and Maduna will be offered new contracts. The meeting is set to take place in the coming weeks but the players know that the club wants to keep them,” a source is quoted as saying.

Amazulu players and staff will return from their Christmas break next week, when it is expected the contracts will be discussed.

Usuthu are believed to be eager to expand their squad with a Caf Champions League group stage campaign awaiting them in the coming months.

“I won’t mention names but there are a few players we’ve spoken to who their teams won’t release because they are struggling in the league,” Zungu revealed to KickOff.

“They said they won’t release them now in the January transfer window because they are fighting for survival themselves.

“There are quite a few targets but we definitely won’t sign more than a handful.

“Remember we have a strong team, we have determined players, they’ve had a bad patch of successive draws, but they are intent on proving everyone wrong and they are working hard in training, it’s just that lady luck had turned her back on them.

“The current crop is a group of gifted young men that need our support, so we will just strengthen because we had injuries, so maybe we need to strengthen the team to ease the pressure.

“So we strengthening for different reasons but it won’t be a handful.

“I won’t say either which positions, but all the areas in the team are subject to review.

“We want a balance in the team and everyone knows that at AmaZulu we like building from the back, everyone knows AmaZulu enjoys high-press, so whoever we bring in it got to be a player who is suited to that style of AmaZulu.”