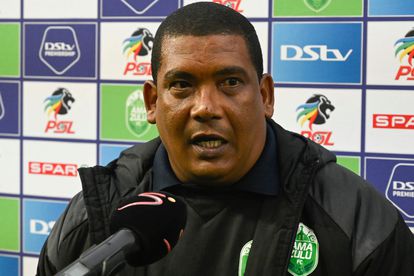 The KZN club climbed up to the summit of the DStv Premiership table after they edged Truter’s former club 3-2 on Friday night.

AmaZulu trailed 2-1 before goals in the 79th and 90th minutes saw them leave with the spoils.

It was the second away victory for Truter against the Birds since he took over at AmaZulu in March.

He described the match as an “open game” but interestingly he added that Swallows’ home ground has become their “home” – a place where they can bank on collecting three points.

TRUTER THROWS A PUNCH AT SWALLOWS

“Dobsonville has become our second home, this is where we come to pick up three points,” Truter told SuperSport after the game.

“Even last season, so it is my home.”

Truter also believes there should have been a red card in a match following the incident that occurred when Keegan Allan tackled Keagan Buchanan.

“I think somebody should have been sent off tonight whether is my team or the opposition, they were some career-ending tackles that was in this game,” he added.

“Look for us, it’s goals conceded again. That’s my only worry, look we’ll score with the firepower we have upfront and from the bench as well.

“I’m confident that we’ll score again but conceding goals is now a problem for us.”

New shopping mall opens in Gauteng – and has a shooting range!