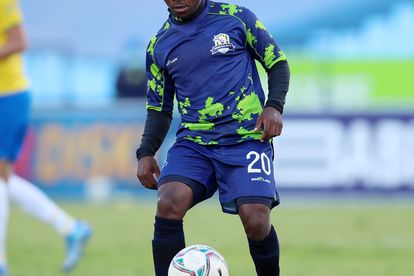 Ndabayithethwa Ndlondlo of Marumo Gallants during the DStv Premiership 2021/22 match between Kaizer Chiefs and Maritzburg United on the 23 December 2021 at the Loftus Versveld Stadium, Pretoria ©Muzi Ntombela/BackpagePix

Ndabayithethwa Ndlondlo of Marumo Gallants during the DStv Premiership 2021/22 match between Kaizer Chiefs and Maritzburg United on the 23 December 2021 at the Loftus Versveld Stadium, Pretoria ©Muzi Ntombela/BackpagePix

The agent of Marumo Gallants midfielder Ndabayithethwa Ndlondlo has confirmed that he expects an offer one of Kaizer Chiefs, Orlando Pirates or Mamelodi Sundowns soon.

Ndlondlo has been a revelation for Gallants for the past two seasons, with his exploits in midfield doing enough to attract interest from all of Chiefs, Pirates and Sundowns.

Ndlondlo was immense for TTM and now Gallants

Both Pirates and Sundowns were thought to be going head to head in an effort to prize Ndlondlo away from Gallants during the previous window. This interest came after the player played a sterling role in the club’s run to win the Nedbank Cup while still under their previous banner of TTM. The name may have changed, but not Ndlondlo’s form, as he has continued to grow in leaps and bounds since.

It is then unclear when Chiefs joined the interest train, as they were previously linked extensively with Supersport United midfield duo Sipho Mbule and Teboho Mokoena during the previous transfer window. However, the latest reports do credit the Glamour Boy’s for with having an interest in the player. Ndlondlo’s agent Benjee Nkhato has since clarified the players current situation amidst rumours that he could be on the move during the ongoing January transfer window.

“We have received calls but nothing in writing as yet, and I can’t reveal from which teams, No formal talks as yet, but we are waiting, we are anticipating to receive formal offers.Remember, the player still has a contract with Gallants. The two teams must agree first before finalising with the player.If the clubs can agree [on] terms, he (Ndlondlo) will definitely move, and obviously, we will do that with the blessing from his current club.” Nkhato said to iDiskiTimes.

The little pocket rocket looks like he could be a good addition to any of Chiefs, Pirates and Sundowns teams, with bite in the tackle, energy as well ability to shoot from range. But which if the three clubs needs him the bost.