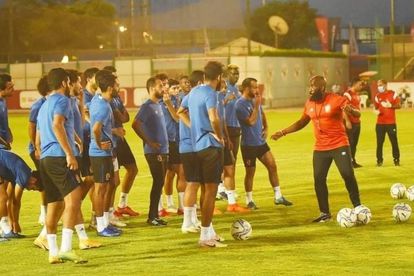 One of Pitso Mosimane‘s ‘right-hand men’ is off to Namibia to complete his UEFA coaching badge although he’s not really a tactical coach.

Kabelo Rangoaga has worked as a strength and conditioning coach for Mosimane’s previous teams – Mamelodi Sundowns and Al Ahly.

He is again part of Mosimane’s technical team at Al-Ahli Saudi, the club they recently joined following their sabbatical.

However, Rangoaga will only be able to join Mosimane and Co. in Saudi Arabia next week Tuesday, 11 October.

Speaking to Daily Sun, Rangoaga said he is doing the coaching badge for personal growth, adding that the latest achievement doesn’t mean he wants to switch careers.

Furthermore, Rangoaga believes working in Egypt for two years (Al Ahly) helped him to prepare for the job at Al-Ahli Saudi.

“For me, it’s more of a personal growth. I have always been a fitness coach. Now, this doesn’t mean I want to be a tactical coach. It’s all about getting more knowledge on the game so that I can do my job even better,” said Rangoaga.

“Egypt has played a huge role for me to prepare for Saudi. The culture is the same but obviously, it can never be 100 per cent similar.”

“It’s challenging to work in other countries like Egypt because you have been in South Africa your whole life, and obviously, there will be a culture shock,” added Rangoaga.