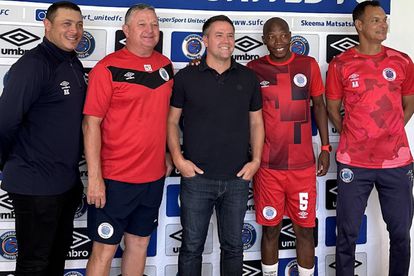 On Thursday morning, SuperSport United coach Gavin Hunt took to Twitter with a “teaser” post of sorts as he shared the news that legendary former England, Liverpool, Real Madrid and Manchester United star Michael Owen would be coming to training.

“Am I dreaming?” Hunt commented, while in the afternoon, he posted several pictures with Owen, who turned up at the team’s base in in Atteridgeville, Pretoria

Michael Owen is one of the most famous English footballers, who played as a striker for Liverpool, Real Madrid, Newcastle United, Manchester United and Stoke City, as well as for the England national team during a famed career that spanned nearly two decades.

Since retiring from football in 2013, he has become a racehorse breeder and owner and regularly features as a sports pundit and commentator.

The reason for Owen attending the SuperSport training session are not yet know, but it is undoubtedly a very special moment for the team and coach Gavin Hunt.

You can see the pictures with Michael Owen below: