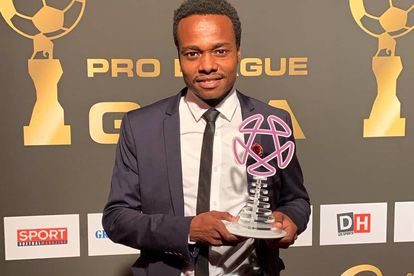 A Premier League debut may still be a distant prospect for Percy Tau, but the Bafana star could yet find himself playing top-flight football once again.

Tau spent his first season in Belgium’s second tier after being loaned out to Royal Union Saint Gilloise by English outfit Brighton and Hove Albion, who were unable to field him due to work permit issues.

As English publication The Argus reports, the 25-year-old could be in for another season in Belgium, but with a different club.

Club Brugge, who play in the country’s premiership are said to be interested in bringing the player on board for a loan spell after he impressed in the Proximus League – bagging 13 goals and as many assists on his way to being named the league’s player of the season.

“Tau will go out on loan again, not make a permanent move,” the publication said of the ex-Mamelodi Sundowns man.”There is no suggestion that Albion are giving up on the work permit challenges currently preventing him from coming to England.”

The Belgian outfit – set for another Uefa Champions League voyage after finishing second in their domestic league – however, have some competition for Tau’s services, with reported interest in France.

Saint Gilloise’s ex-manager Luka Elsner has moved to Ligue One outfit Amiens SC, and is said to be interested in bringing the player out to his new club, where he would be reunited with Bafana teammate and ex-Sundowns player Bongani Zungu.

Reports from Belgium do, however, suggest that Brugge are far ahead in the race, with a deal nearing completion.

“In Brugge, it sounds that the conversations are ongoing and there are several candidates, but sources around Tau say that the deal is virtually complete, apart from a few details. It is a lease agreement,” Belgian publication Het Nieuwsblad reported earlier in the week.

Tau joined Brighton from Sundowns at the start of the 2017/18 season, and was immediately shipped off to Saint Gilloise – a club owned by the Seagulls owner Tony Bloom.

This was due to not being able to secure a work permit, an issue largely brought about by Bafana’s low Fifa ranking.

The player recently returned home from the 2019 Africa Cup of Nations in Egypt, where South Africa crashed out in the quarterfinals and is yet to join his Brighton teammates for pre-season prep.

Brighton begin their Premier League campaign with a trip to Watford on Saturday, 10 August.