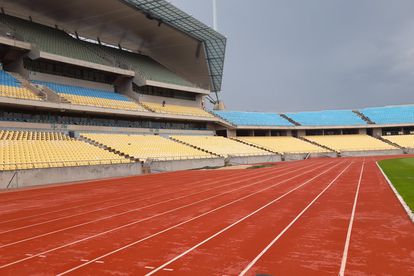 The Premier Soccer League (PSL) together with partners, Nedbank have confirmed that the Royal Bafokeng Stadium near Rustenburg in the North-West Province will host the 2022 Nedbank Cup final.

The 2010 FIFA World Cup official venue which has hosted some historic events, and will now see the champions of South Africa’s premium cup competition crowned on Saturday, 28 May 2022.

“We cannot wait to welcome fans back to a Nedbank Cup Final and what a venue to do just that,” commented Nedbank Group Executive for Marketing and Corporate Affairs, Khensani Nobanda.  “Over our 15 years of involvement with the tournament we have endeavored to take the final to as many venues as possible to benefit surrounding communities through the match and to allow as many fans as possible to experience the showpiece.  We are thus immensely proud to be taking the Nedbank Cup Final to Royal Bafokeng Stadium for the first time,” she added.

Nedbank has also once again committed their support to South African communities by awarding the winning Nedbank Cup team with an opportunity to hand over a multi-purpose sports court to a community of their choice falling under the club’s jurisdiction.  The multipurpose sports courts are created in the aim of developing football in the area with the winning club challenged to visit often as possible to scout talent, inspire and motivate the local community.

Ahead of the final, Nedbank has also unveiled an initiative for fans designed to inspire and to use South Africa’s passion for football to initiate positive money conversations.  Nedbank Reality Football, a series of tell-all conversations delving into the lives, defining moments and even money choices of some of South Africa’s greatest ever footballers (including Teko Modise, Doctor Khumalo, Siphiwe Tshabalala, Reneilwe Letsholonyane, Mark Williams and Jerry Sikhosana), will be made available to fans on YouTube, www.moneyedge.co.za and Spotify with new episodes uploaded weekly.

“We are representing sport, so should have these kinds of discussions often.  I want to give credit to Nedbank for giving us this opportunity to share our stories. My hope is that this becomes an ongoing thing, it should be permanent,” commented Simphiwe Tshabalala on his involvement in Nedbank Reality Football.

Tickets will be sold at Ticketpro outlets countrywide.  The PSL will advise on ticket availability and prices in due course.