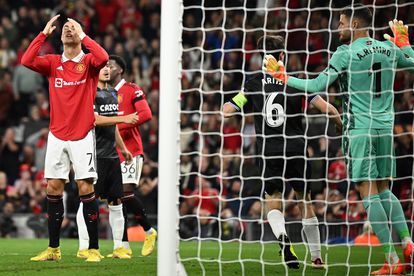 CR7 had another night to forget at Old Trafford. Image: Oli Scarff / AFP

CR7 had another night to forget at Old Trafford. Image: Oli Scarff / AFP

They had gone on an impressive four-match winning streak recently, including wins over Liverpool and Arsenal. That streak was a welcome one for Erik Ten Hag. United had made a disastrous start with two defeats at the outset of the season.

United lost their first two top-flight assignments against Brighton and Brentford but then scored wins over Liverpool, Southampton, Leicester and high-flying Arsenal.

First-team attacking coach Benni McCarthy would have been encouraged by his side’s recent run in the Premier League. However, it’s now back to the drawing board for their trip to Crystal Palace.

It’s safe to say that ex-Man City playmaker David Silva enjoyed his trips to Old Trafford while he was in the Premier League. He was integral to Sociedad’s win at Old Trafford last night on the opening night of the Europa League group stages.

It’s widely expected that Premier League fixtures scheduled for this weekend are going to be postponed. Britain will mourn the death of Queen Elizabeth II.