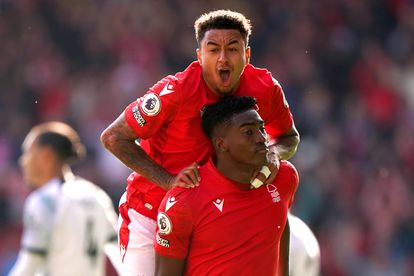 Nottingham Forest centre forward Taiwo Awoniyi wrote his name into folklore with a goal that have the club victory over Liverpool.

Liverpool drew a blank on another away day and look to be well off the pace in the Premier League.

The Reds are in the midst of their longest winless run on the road since the 2006/7 season.

For Nottingham Forest the win was massive as it lifts them off the bottom of the Premier League, if only temporarily, and helps them avoid falling too far behind in the relegation battle.

Forest’s return to the Premier League has been difficult with the win over Liverpool just their second in 12 matches.

The goal itself wasn’t an all-time classic but Taiwo Awoniyi did his job as a centre forward and buried a rebound after a free kick.

Watch: Taiwo Awoniyi gets the winner

He said: “The performance I can kind of explain, the result not. I never saw a game where one team has …. I’m not sure, four or five no-brainers from a set-piece.

“We have to finish them off. We should have put the game to bed. The goal we conceded was a big mistake from us [by Joe Gomez]. All the chances they had we gave them, because too often we played the wrong pass.

“We had to play three games in six days with a really limited squad. That’s just how it is. Result-wise, we should have showed consistency today with better finishing.

“Our next game is Wednesday so it’s like a holiday. I hope a few players will be back.

“Forest showed fight. It’s the Premier League, they are all good and they all fight. But giving a team six clear-cut chances from set pieces, I’m not sure I should be praising Forest to be honest.

“They are a great team, Steve is a fantastic manager, but we have to win today. Done. And we didn’t, so credit to Nottingham Forest.”