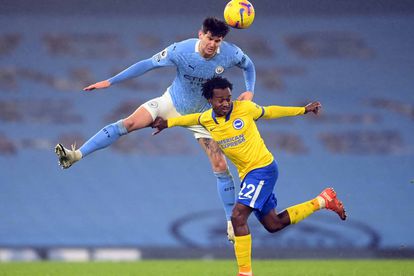 Tau, who made his FA Cup debut for Brighton against Notts County last Sunday off the bench, was this time around named in the Seagulls’ starting XI for the match at the Etihad Stadium.

And he certainly didn’t disappoint, despite City running out 1-0 winners.

TAU’S BRIGHTON ARE DOWN IN 17TH PLACE IN THE LOG

City star Phil Foden grabbed the winner in the 44th minute as the Manchester giants maintained their title challenge.

City are now third in the standings, four points behind cross-town rivals Manchester United. City have, however, played one fewer match to date than United.

Brighton, meanwhile, are down in a lowly 17th place, only two points above the relegation zone.

Worryingly, they have played two more matches than Fulham who lie in 18th place and who are coming off a commendable 1-1 draw with Jose Mourinho’s Tottenham in a match also played on Wednesday.

Graham Potter singled out both Percy Tau and his strike partner Leandro Trossard for praise after the match.

“It is a difficult game for him [Tau] to start for a forward because they make you defend as a team. So that takes away a little bit of his attacking qualities, along with Leo [Trossard],” Potter said.

“They both work so hard for the team, they work so hard and were fantastic in that regard. They grew and grew. He [Tau] has only been with us for a week, we have to make sure he is available for the coming games, good first game, he will get better and he will get a better understanding with us.”

AWAY TO LEEDS IN THEIR NEXT MATCH

Brighton are next in action in a clash away against Leeds United on Saturday, 16 January.