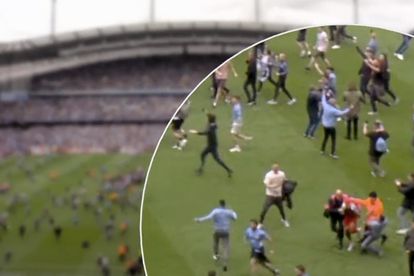 Shocking footage has emerged of Aston Villa goalkeeper Robin Olsen being assaulted after the Manchester City game at the Etihad on Sunday.

Shocking footage has emerged of Aston Villa goalkeeper Robin Olsen being assaulted after the Manchester City game at the Etihad on Sunday.

In chaotic scenes at the Etihad on Sunday, thousands of fans stormed onto the pitch after Manchester City claimed a thrilling comeback win over Villa to secure a historic Premier League title.

However, there were always fears that there could be clashes with fans, and Aston Villa manager Steven Gerrard has said goalkeeper Robin Olsen was on the receiving end of horrible actions by some spectators who stormed the pitch.

“My goalkeeper was attacked and I think those questions should go to Pep (Guardiola) and Manchester City. We’ll go and check if he’s ok now,” Gerrard said.

You can watch the incident involving Olsen and Man City fans below:

City apologised to Olsen and promised to launch an immediate investigation.

“Manchester City would like to sincerely apologise to Aston Villa goalkeeper Robin Olsen, who was assaulted after the final whistle at today’s match when fans entered the pitch,” City said in a statement.

“The Club has launched an immediate investigation and once identified, the individual responsible will be issued with an indefinite stadium ban.”

Meanwhile, the crossbar at the end where City scored their goals was brought down by the weight of fans climbing on it.

The scenes brought back immediate comparisons and concerns that were highlighted earlier in the week when Crystal Palace manager Patrick Vieira was involved in an ugly altercation with a pitch invader after the club suffered a loss to Everton.

Television footage showed Vieira being taunted by an Everton supporter as fans ran on to the pitch at full-time, with Crystal Palace having suffered a 3-2 defeat.

The Frenchman could be clearly seen receiving abuse before kicking out at the fan, who fell to the floor before Vieira was eventually ushered away by other supporters.

BREAKING: JALI, SHALULILE AND LETSOALO UP FOR PSL PLAYER OF THE SEASON!

On the season-ending day of action, Guardiola’s side were teetering on the brink of blowing the title after falling 2-0 behind midway through the second half in the final chapter of their pulsating battle for supremacy with Liverpool.

But Ilkay Gundogan sparked an astonishing Manchester City revival at the Etihad Stadium as the German midfielder reduced the deficit before Rodri grabbed the equaliser.

MANCHESTER CITY ENDED ONE POINT AHEAD OF LIVERPOOL

Manchester City finished with 93 points, one ahead of Liverpool as they ended their rivals hopes of winning an unprecedented quadruple.