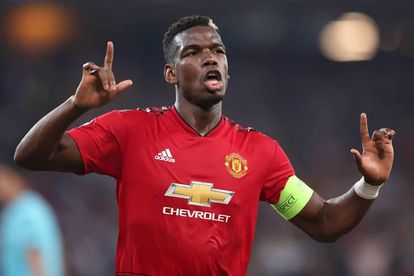 Manchester United’s Paul Pogba is the only non-Manchester City or Liverpool player to be named in the Professional Footballers’ Association’s Premier League team of the year on Thursday.

The 26-year-old French World Cup-winning midfielder’s inclusion is a surprise after an indifferent season, although he hit a purple patch after Ole Gunnar Solskjaer arrived at Old Trafford as interim manger.

City and Liverpool have been locked in an enthralling duel for the title, with Guardiola’s City going top again on Wednesday after beating United 2-0 at Old Trafford, with Pogba unable to inspire his side to a much-needed win.

Van Dijk and Sterling are believed to be in the running for the player of the year award.

There is no place, though, for Liverpool’s Egyptian star Mo Salah, who has scored 19 Premier League goals this season, Spurs pair Harry Kane and Son Heung-min or Chelsea playmaker Eden Hazard.

The PFA Team of the Year is voted for by members of the Professional Footballers’ Association.

Manchester City had five players in the 2017-18 side but only Argentine star Aguero retains his place from the team of 12 months ago.

Ederson Moraes encapsulates everything a modern goalkeeper should be; adding to his terrific shot-stopping abilities with excellent distribution and confi dence with the ball at his feet. The 25-year-old has been a vital part in Pep Guardiola’s style of football at the Etihad. The Brazilian is set to improve on the 17 clean sheets he collected last season and seems sure to play a prominent role for years to come at Manchester City.

Alexander-Arnold exploded on to the domestic scene last season and has built on those displays this term, performing admirably in Liverpool’s Premier League title charge, as well as opening his goalscoring account for England in November. The 20-year-old academy graduate has excelled under Jürgen Klopp with his pinpoint crossing accuracy and superb defensive work, the latter helping Liverpool’s defence become one of the meanest in the Premier League.

The all-action Dutch defender has been outstanding for Liverpool throughout this campaign as the defensive rock in a back four who are well on their way to 20 clean sheets for the Premier League season. As well as his superb performances in helping keep the ball out of Liverpool’s net, Van Dijk has chipped in with some important goals, and launched moves that have led to goals with his raking long passes.

The January 2018 signing has excelled in his first full season at the Etihad Stadium as City look to clinch a second successive Premier League title. The 24-year-old Frenchman has excelled in a team with over a dozen clean sheets this season. The former Athletic Bilbao defender’s combative style and composure on the ball are hallmarks of Pep Guardiola’s team.

The former Dundee United and Hull City full-back has become a cult hero amongst the Anfield faithful, and he has been a linchpin in the Liverpool side as they search for a maiden Premier League title, his rapid bursts up and down the left fl ank highlighting his energetic style. The 24-year-old Scotland captain has notched up more assists than any other defender in the Premier League this campaign via his astute passing and pinpoint crossing.

A World Cup winner last summer, Pogba has enjoyed the best goalscoring season of his career, racking up over a dozen goals as United battle for a Champions League spot. Possessing stunning ballstriking and passing abilities with both feet, along with a tremendous work rate, the 26-year-old has thrived under Ole Gunnar Solskjaer and can be expected to have a stellar end to the 2018-19 campaign.

The combative Brazilian has played a crucial role in Manchester City’s success over the last six seasons, his no-nonsense approach being matched by a delightful passing ability and creativity. As he approaches 200 league appearances in England, the 33-year-old can boast two Premier League titles as well as four League Cups and he will be in the hunt for more domestic and European success.

Whether operating as a No.10, out wide or in midfield, Bernardo Silva has been immense for City this season. He has taken his opportunities this season becoming a regular fixture in citys starting eleven delivering outstanding performances. His famous 13.7km performance in the 2-1 defeat of Liverpool in January typified the Lisbon-born star’s attitude and work rate. “There’s nowhere else I want to be,” he said, after signing a new deal last month.

Manchester City and England’s speedster has had another fabulous campaign under Pep Guardiola, racking up more than a dozen goals to help his club in the thrilling Premier League title battle. Fast becoming a model of consistency anywhere in the defending champions’ forward line, Sterling has earned praise from England boss Gareth Southgate, who has described his season so far as “phenomenal”.

The prolific Argentina striker has secured a place in the PFA Premier League Team of the Year after another tremendous campaign as Manchester City’s leading marksman. Back-to-back Premier League hat-tricks against Arsenal and Chelsea launched the 30-year-old into Golden Boot contention, a prize he is looking to win for a second time, and his deadly marksmanship could well be the crucial factor in this season’s title race.

A vital member of Liverpool’s outstanding attacking trio, Mané has earned a second PFA Premier League Team of the Year nomination in three seasons after a campaign marked by decisive goals for the Anfi eld club. With a Champions League brace in the Allianz Arena against Bayern Munich, as well as strikes against Arsenal and Manchester United under his belt, the Senegalese attacker will no doubt have a major role to play as Liverpool aim to win a fi rst league title since 1990.