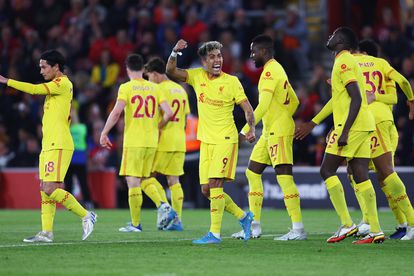 Liverpool ensured the Premier League title race will go to the final day of the season as they survived a scare to beat Southampton. Photo: Twitter @LFC

Liverpool ensured the Premier League title race will go to the final day of the season as they survived a scare to beat Southampton. Photo: Twitter @LFC

Liverpool ensured the Premier League title race will go to the final day of the season as the under-strength quadruple chasers survived a scare to beat Southampton 2-1 on Tuesday.

Despite effectively fielding a reserve team and trailing to Nathan Redmond’s early strike, Liverpool hit back through goals from Takumi Minamino and Joel Matip.

The Reds are just one point behind leaders Manchester City, with both teams having one game left.

A title race for the ages will go Manchester City’s way if they win against Aston Villa at the Etihad Stadium on Sunday.

Klopp insisted at the weekend that he does not expect City to drop points against Villa.

But Liverpool would be crowned champions for the second time in three seasons if they beat Wolves at Anfield and City fail to win.

Klopp’s side will be expected to do their part of the equation against Wolves, especially now their refreshed key players can return to the team.

Sadio Mane, Luis Diaz, Andrew Robertson, Thiago Alcantara and Trent Alexander-Arnold were among those left out against Southampton, while Mohamed Salah and Virgil van Dijk were sidelined with injuries suffered at Wembley.

City boss Pep Guardiola said he planned to watch the game on television and if he tuned in, it would have made for frustrating viewing as Southampton squandered the lead.

But it was Riyad Mahrez’s missed penalty in the final minutes of City’s 2-2 draw at West Ham on Sunday which had given Liverpool renewed hope of catching the leaders.

And the Reds, hoping to become the first English club to win all four major trophies in one season, will settle their history bid in the last two games of their incredible, marathon campaign.

First, Liverpool will try to avoid a repeat of 2019, when they beat Wolves on the last day but were still pipped to the title by City.

Then they head to Paris to face Real Madrid in the Champions League final on May 28.

Southampton had lost seven of their previous 10 league matches, giving Klopp belief that his bold selection could pay off.

He might have had second thoughts when Armando Broja weaved unchecked into the area, forcing Alisson Becker to save with his out-stretched leg.

It was a warning Liverpool failed to heed and Ralph Hasenhuttl’s side took the lead after 13 minutes.

Redmond sprinted away down the left flank, cutting inside to the edge of the area and unleashed a fierce strike that took a deflection off James Milner as it flashed into the far corner.

Klopp complained furiously that Diogo Jota was fouled by Lyanco in the build-up but, although it did appear there was a trip, the German’s protests fell on deaf ears.

With their title hopes in jeopardy, Liverpool showed the desire and character that inspired Klopp to label them “mentality monsters”.

Minamino has struggled to break into the Liverpool team on a regular basis and was sent on loan to Southampton last season.

The Japan forward made the most of a rare Premier League start with a brilliant equaliser in the 27th minute.

Joe Gomez fizzed a pass into Jota and his perfectly weighted lay-off reached Minamino, who beat Alex McCarthy at the near post with a ferocious rising drive.

Liverpool turned the screw and Milner’s long-range effort was pushed away by McCarthy before Roberto Firmino fired over.

Klopp’s men monopolised over 70 percent of the possession in the first half and it was the same story after the break.

Jota shot just wide from Kostas Tsimikas’s cross, while Harvey Elliott smashed into the side-netting from an acute angle.

Liverpool’s relentless pressure was rewarded in the 67th minute.

Matip and Kyle Walker-Peters challenged for Tsimikas’s corner and the ball looped in over McCarthy, forcing City to keep the champagne on ice for now.