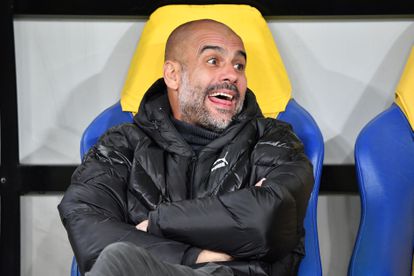 Manchester City will host Manchester United in the 187th edition of the Manchester derby on Sunday, 6 March at the Etihad Stadium. Photo by Sergei SUPINSKY / AFP

Manchester City will host Manchester United in the 187th edition of the Manchester derby on Sunday, 6 March at the Etihad Stadium. Photo by Sergei SUPINSKY / AFP

Manchester City’s lead at the top of the English Premier League continues to grow as Pep Guardiola’s men have now won 20 consecutive games in all competitions, while the chasing pack struggle to maintain any consistent form.

Manchester United’s 0-0 draw at Chelsea and Leicester’s 3-1 home defeat to Arsenal on Sunday, mean City now enjoy a 12-point advantage in the Premier League after seeing off West Ham 2-1 on Saturday.

The Hammers remain in fourth thanks to Chelsea’s stalemate, but Liverpool, Tottenham, Aston Villa and Arsenal all won to tighten the race for a place in next season’s Champions League.

City in league of their own

Even on a day when Guardiola admitted City “were not going to paint anything beautiful” they still found a way to win against a well-organised West Ham, who had lost only once previously in the league in 2021.

The Premier League leaders were the only side in the top five to win this weekend as United’s dismal record against the traditional heavyweights of Liverpool, City, Chelsea, Tottenham and Arsenal continued.

Ole Gunnar Solskjaer’s men have not won in seven league meetings against those sides this season and have scored only once, from the penalty spot in a 6-1 thrashing by Spurs early in the season.

Solskjaer was furious at the denial of a spot-kick at Stamford Bridge, but also has to reflect on whether his conservative nature against stronger opposition cost United the chance to challenge City for the title.

Under fire after five defeats in six league game, Jose Mourinho brought Gareth Bale in from the cold to save his season and the Welshman delivered with a double in a much-needed 4-0 win against Burnley on Sunday.

Bale’s Premier League return to Tottenham on loan from Real Madrid had been written off as a flop after he suffered with fitness issues and poor form for the first half of the campaign.

The 31-year-old was criticised by Mourinho after a spat over his fitness when he withdrew from the squad for an FA Cup defeat at Everton.

But Bale showed signs of a revival with a goal in each leg of Tottenham’s Europa League last 32 rout of Wolfsberger, earning just his third league start of the season against the Clarets.

The four-time Champions League winner seized his chance with two predatory finishes and an assist for Harry Kane to ease the pressure on Mourinho.

“There is not one single manager in the world that doesn’t play Gareth Bale if Gareth Bale is in very good condition,” said Mourinho.

“Now he is better than ever. He played very well and his condition is very good. He helped the team to win and that’s the most important thing.”

West Brom’s 1-0 Premier League win over Brighton kept the Baggies in the fight to beat the drop, but Sam Allardyce’s men needed more wayward finishing by the Seagulls from the penalty spot and a moment of madness from referee Lee Mason to claim all three points.

Dunk revealed he had even asked Mason if he could take the set-piece and the referee obliged by blowing the whistle. However, with West Brom ‘keeper Sam Johnstone still arranging his wall, Mason blew for a second time just before the ball crossed the line.

In the madness that ensued, Mason changed his mind twice over whether to give the goal before it was finally ruled out.

“I said to the ref ‘can I take it’, he blew his whistle and I took it. I don’t think he knew what he was doing.”

Mason could argue the same be said of Brighton in front of goal.

Danny Welbeck hit the post with a second penalty in the second-half as for the umpteenth time this season their domination of the play counted for little.

QUIZ TIME! | ANSWER THESE 5 EASY SOCCER QUESTIONS AND YOU COULD BE R1 000 RICHER!