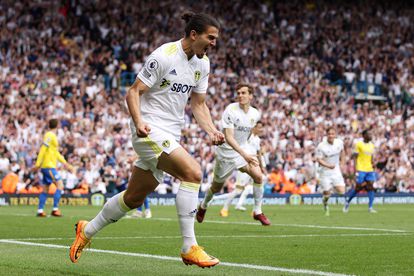 A late goal ensured that Leeds gave themselves a shot at survival. Photo: AFP

A late goal ensured that Leeds gave themselves a shot at survival. Photo: AFP

Leeds United left it late but snatched a point at home to Brighton to move out of the relegation zone.

A Harry Kane penalty sunk Burnley and allowed the Yorkshire club to move out of the drop zone for the time being.

Pascal Struijk’s late leveller at Elland Road gave Leeds hope but Burnley have a game in hand, facing Aston Villa on Thursday ahead of the final Premier League matchday on Sunday.

Danny Welbeck put in-form Brighton in front, but he then missed a glorious chance to double Brighton’s lead and Struijk’s stoppage time header earned a point.

“Nothing comes easy for us. We seem to dig holes and then have to find a way to dig out,” said Leeds boss Jesse Marsch.

Everton are still in trouble

Elsewhere Everton failed to take their chance to seal safety as they gave up a lead against Brentford at Goodison Park.

The Toffees were their own worst enemies as they finished the match with nine men.

Everton had taken the lead in the 10th minute through Dominic Calvert-Lewin, but just eight minutes later the hosts saw teenage centre back Jarrad Branthwaite deservedly sent-off for a professional foul.

Seamus Coleman put the ball into his own net under pressure from Wissa. However, Richarlison restored the advantage from the penalty spot to give Everton a 2-1 lead at halftime.

Two headed goals in three minutes from Wissa and Rico Henry, and a late red card for Salomon Rondon ensured that Frank Lampard had a miserable Sunday.

Everton can secure safety at home to Crystal Palace on Thursday, failing that they will have to get the job done in a final day fixture against Arsenal.