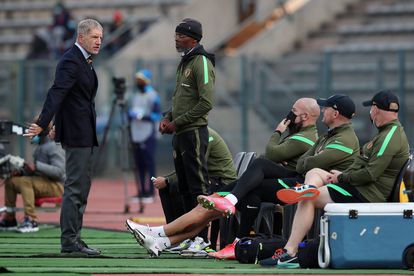 Kaizer Chiefs embarrassingly crashed out of the Nedbank Cup earlier this season, while they have managed just 11 wins from 25 matches in the DStv Premiership to be left stranded in fifth position.

However, there was also mixed reaction on social media following the news after Baxter’s departure, with certain supporters suggesting it was not fair for Baxter to be made the scapegoat for the team’s struggles.

Zwane, who has stepped in as interim coach along with Dilion Sheppard, has endured a challenging period after taking over from Baxter – with Amakhosi currently on a winless streak that doesn’t look likely to end soon.

READ | CHIEFS COACH: NGCOBO APOLOGISED AFTER ‘COMING TO HIS SENSES’

Zwane has moved to suggest it will take time to turn things around, while touching on his working relationship with past coaches Gavin Hunt and Baxter.

“Look, we were close with coach Hunt. I was close with coach Stuart,” Zwane said on Thursday, as quoted by Phakaaathi. “And unfortunately for both coaches the results were not forthcoming and the club decided that maybe, you know, for continuity at that moment I should help.

“For me, it is not because of what the coaches wanted to do or what I didn’t want them to do. It is when you see that, ‘okay we have players and we have been trying to do this and we all agreed on it, but things are not happening’ that you realise that surely the situation needs to change.

“We tried everything to help the players, to make sure that we grind the results and get positive results with both coach Gavin and coach Stuart. But they were not coming. The performance was also a little bit of a worrying factor.

Recently, and somewhat ironically, Baxter recently admitted that he would walk away from the Chiefs job if the club’s hierarchy believed it was the correct decision.

“I don’t have any message to the fans because if they want me to go I’ll go,” Baxter said, as quoted by iDiski Times. If the chairman says to me I don’t think you’re doing a good job then I’ll walk. I’ve got no problem doing that.

“I will walk myself, if I don’t think I’m affecting the team in a positive way, I’ll walk, not a problem. I’m the only coach that has given this club any success in the last 20 years, but I’ve got to go because we dominate the game and lose 1-0? I’ve got to listen to that?

“It’s ok, they’re a fans, they have the right to say exactly what they want. If that reflects what the chairman thinks and what the players think and the majority of our fans think then maybe I should walk.

“But that’s nothing a group of fans will decide, that’s something the football club or I will decide. If I get that feeling, then of course I’ll walk. But at the moment I’m looking at it as a game we should’ve won but we didn’t and that happens in football.”