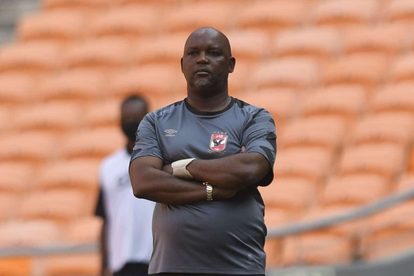 Pitso Mosimane’s success is just continuing to be unbelievable. The Al Ahly coach has led his Egyptian side to the CAFCL semi-finals after dumping out Moroccan giants Raja Casablanca.

The quarter-final round began with a narrow 2-1 over Raja last weekend in Cairo, before the job was finished in Morocco with a 1-1 result.

Chatting to the media after the game, Pitso Mosiamne said: It was a tough game. We respected Raja very much, and we were the best throughout the two games,” the South African said via KingFut.

“We wasted a penalty in Cairo and another in Casablanca, so there is no question about our abilities.

“Until the last minute, we were the best and close to winning if it weren’t for Mohamed Sherif’s wasted chance.

“We need to improve the finishing touch, yet we are confident in our ability to go forward.

“We have proven today that we know how to play the CAF Champions League matches,” he added.

SUNDOWNS OUT. HERE ARE THE CAFCL FINAL FOUR FIXTURES

The DStv Premiership champions were high favourites to lift their second CAF Champions League title until a shock quarter-final defeat at the hands of Angola’s Pedro de Luanda on Saturday.

The last four will be dominated by North African sides in Ahly of Egypt, Tunisia’s ES Setif as well as Morocco’s Wydad Casablanca. Read the full story here.