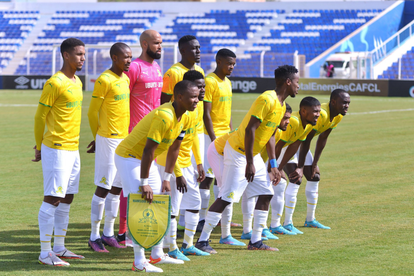 Two Mamelodi Sundowns players have been named among the best-performing players in the African continent last week.

As you might have read here on The South African website last weekend, the DStv Premiership champions and 2016 CAFCL winners beat Al Hilal 4-2 last Saturday.

The result did not make much difference though, as Kabo Yellow had already sealed a quarter-final place before the game.

Additionally, the Tshwane giants are still to play a final group game at home to Al-Merrikh on 1 April.

Meanwhile, two Mamelodi Sundowns players have been rewarded for last weekend’s performances in the 4-2 win over Al-Hilal.

As confirmed by CAF on Monday, the Mamelodi Sundowns duo of Morena and Mokoena have been named in the CAFCL Team of the Week.

Morena delivered a fantastic brace while Mokoena contributed with a free-kick screamer for the ages.

Meanwhile, Mokoena is currently with Bafana Bafana to take on Guinea and France in the next six days, while Morena was forced to withdraw due to injury.

Orlando Pirates fans, as well as all South African football followers, maybe except for Kaizer Chiefs, should be filled with pride.

Following the Buccaneers’ superb passage to the CAFCC quarter-finals last weekend, a 2-0 win over JS Saoura in Algeria, Bucs became the highest scorers.

The five-time DStv Premiership champions achieved the record after tearing apart the likes of Royal Leopards and Saoura. Read the full story here.

Police say no children were shot in Soweto, however, a CIT heist happened near a school