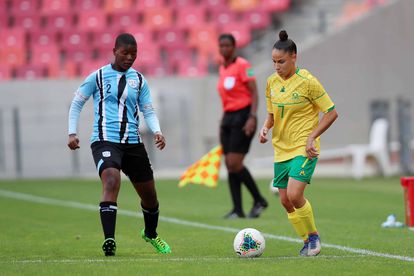 Banyana Banyana clinched their seventh Cosafa Women’s Championship title, and their third on the bounce, when they defeated neighbours Botswana 2-1 in the final at Nelson Mandela Bay Stadium on Saturday.

The defending champions were looking to secure back-to-back championships after dominating in the build-up to the clash against their neighbours, where they netted 20 times, conceding just twice.

Staying true to their form in the lead-up to the final, Banyana came out guns blazing as they registered their name in the scoreboard through the competition’s leading goal-scorer, Sibulele Holweni, who scored in the very first minute.

There were chances to further extend the lead, but none landed in the back of the net as the host nation went into the break with a slim lead.

The second half presented a more assured performance from Botswana, who threatened the Banyana goal on a few occasions.

Gabriela Salgado, however, made it 2-0 to the hosts with a well taken finish from inside the box.

A rare error from the South Africans gifted Botswana a consolation goal in the 86th minute, with Thanda Makgabo cutting the defending champions’ lead in half.

More chances fell to Banyana, but their narrowest lead throughout the competition, where they managed over 20 goals, conceding three, proved enough to secure victory and the all-important Cosafa Women’s Championship title, their third in the running and seventh overall.