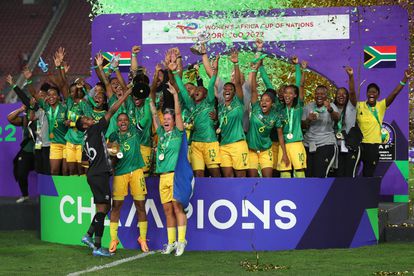 ALSO READ | ITUMELENG KHUNE HASN’T PLAYED FOR KAIZER CHIEFS IN OVER A YEAR!

The two sides will meet in the first match at Orlando Stadium on Friday, 2 September at 18:00 and then face off in the second encounter three days later (Monday, 5 September) at a venue to be confirmed.

Brazil ranked ninth in the world

The South African Football Association (SAFA) and the Brazilian Football Confederation confirmed the matches on Thursday.

Coach Desiree Ellis said she was excited to be facing the Copa América Femenina winners in a mouthwatering showdown between two recently-crowned continental champions.

“This is amazing,” the Banyana Banyana coach told www.safa.net.

“You know, immediately after the WAFCON last month, SAFA said they would give us the best possible preparation for the 2023 FIFA Women’s World Cup in Australia and New Zealand. What more could we ask for? A powerhouse, not just in women’s football but also in men’s football.

“Brazil are the champions of Copa America, a powerhouse. What a way to start preparing for the World Cup, what a way to start off our campaign. We want to say thank you to SAFA. They have always been true to their word and we look forward to playing Brazil and whatever is to come after.”

Both sides have qualified for the Women’s World Cup to be played in Australia and New Zealand next year.

Brazil are currently ranked ninth in the world with Banyana Banyana in 54th place.