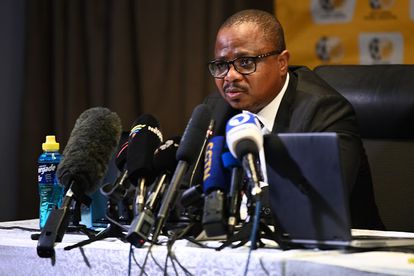 GFA had released a statement on Thursday, going on the offensive on SAFA’s decision to appeal Bafana Bafana’s 1-0 loss to Ghana.

Ghana beat Bafana Bafana courtesy of a converted penalty that was awarded in dubious circumstances on Sunday evening in the Ghana Cape Coast.

The penalty came from a Ghanaian corner which saw the ball finding its way all the way to Daniel Amartey in the Bafana Bafana box. With just the merest of touches on the shoulder from Mamelodi Sundowns defender Rushine de Reuck, the Leicester City utility player went down to the ground in the most theatrical fashion imaginable, with Ndiaye pointing to the spot immediately.

with Andre Ayew, who was earning his landmark 100th appearance for Ghana on the night, stepping up as the captain, slotting the spot kick away, and sending Bafana Bafana captain Ronwen Williams the wrong way in the process. In the end that goal would prove to be the decisive one as it sent the home side to the play-off round of the World Cup Qualifiers and the visitors home.

READ | POTENTIAL BAD NEWS FOR BAFANA BAFANA? HERE’S THE ONE FACTOR THAT SECURED SENEGAL’S REPLAY BUT COULD HAMPER SAFA’S APPEAL

SAFA CEO Teboho Motlanthe then vowed that they will fight the matter and seek the intervention of both FIFA and CAF for this matter.  They then followed suit with with FIFA accepting that they had received SAFA’s official complaint, following an official press and public briefing held by the association.

GFA initially seemed not to take offence to SAFA appealing the decision with their Communications Director Henry Asante Twum, saying that the association respects the decision of SAFA to take the matter to FIFA. But then in their official statement on Thursday, that tone changed to one which featured a rather disrespectful undertone.

“It is shocking, irresponsible, and outright disrespect to note that our colleagues from South Africa Football Association (with whom we have good relationships with and mutual sporting respect) have chosen to spread falsehoods to the media rather than project the real picture of events before, during and after the game.”  Read a part of the GFA statement.

READ | FIFA MAKE DECISION ON BENIN CASE, AND IT COULD SPELL BAD NEWS FOR BAFANA BAFANA

In his response to the GFA statement Motlanthe insisted that he did not want to get into a war of words with the their Ghanaian counterparts.

“The Safa position has never been nine hours. The coach said it was three hours, plus two hours which we can’t blame Ghana for — it is their immigration rules, But we are also saying let’s let the Fifa process take place, and we will respect the decision. We find the GFA’s statement unfortunate and distasteful because it is full of inaccuracies. We did not submit any complaint to the Ghana FA about our treatment in Ghana.” Motlanthe told SowetanLIVE

FIFA have given GFA an opportunity to respond as well with indications being that they, too will not take the situation lying down.