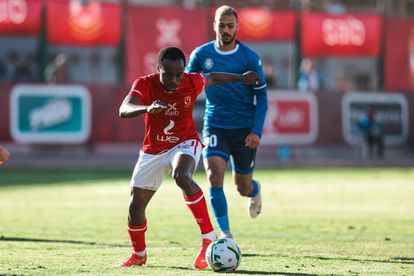 Percy Tau is on his way to making a much-anticipated return but will he make it in time to feature in the bronze medal match for Pitso Mosimane’s AL Ahly or Bafana Bafana’s clash against France?

Tau suffered an injury to his quadriceps, forcing him to be sidelined for four weeks.

Now, the question on everyone’s mind is if he will be fit for Al Ahly’s bronze medal game. Mosimane signed Tau with the pursuit of FIFA Club World Cup glory in mind. Unfortunately, he has not featured in the competition yet.

The Lion of Judah has had a successful recovery and the good news is that he is on his way back.

However, will he make it in time to make his FIFA Club World Cup debut for Bafana Bafana’s massive clash against the French?

READ | PSL AND IRVIN KHOZA SEARCHING FOR THE NEXT KAIZER MOTAUNG!

There is good news and bad news for Tau, he will not be fit too make his Club World Cup debut, according to iDiskiTimes.

The good news is that he is scheduled to make his return in time for Bafana’s massive clash against the defending world champions. Meaning, a scheduled return for Tau in March.

More specifically, 29 March when Hugo Broos’ side take on France in Lille.

Tau could return to training in coming weeks though since he is on schedule with his recovery.

Orlando Pirates star pushing for a move away from Mayfair!