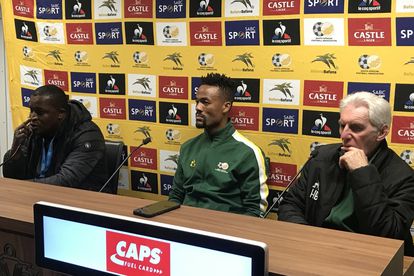 For Tuesday’s pre-Soccer World Cup friendly encounter, the hosts make a trip from the sunny south of France to the more temperate Villeneuve d’Ascq – a city where they’ve not conceded in four internationals (W3, D1).

Les Bleus’ attentions now turn to avenging a 2-1 head-to-head defeat during the 2010 Soccer World Cup hosted by South Africa, which saw them eliminated and began a two-year chain of events leading to Didier Deschamps’ appointment as coach and winning the 2018 World Cup.

France have been highly resilient under the former World Cup winner, and including their recent win against the Ivorians, they are undefeated in the last nine internationals to see them concede first (W4, D5 – 90 minutes).

Contrastingly, the 68th-ranked South Africans have not qualified for the World Cup finals since then, and last Friday’s action saw Hugo Broos’ men held to a goalless draw by underdogs Guinea (FIFA rank: #81) in Belgium.

That was South Africa’s fifth scoring blank across the last six games they’ve played on foreign soil, emphasising their difficulties up front.

While the odds are firmly against South Africa, memories of their last encounter against a European heavyweight may inspire them.

Back in November 2013, Bafana Bafana defeated then-world and European champions Spain 1-0, and the fact that they’ve won their previous three matches versus nations currently in FIFA’s top 10 will certainly be a confidence booster!

Olivier Giroud has been the game’s second scorer in three of France’s previous five international friendly games, with the AC Milan striker twice netting within 25 minutes. He’s up against Teboho Mokoena, who has opened the scoring before half-time in two of the last three matches to see South Africa score at least once.

Just one of South Africa’s previous 13 international outings have seen goals at both ends.