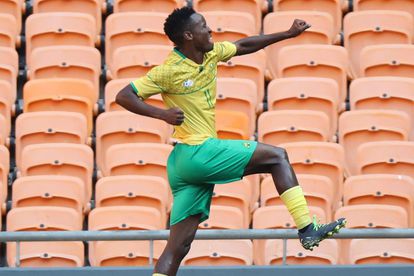 Bafana Bafana head coach Hugo Broos has spoken highly of Themba Zwane who’s been of help since his return to the national team.

South Africa played out to a 1-all draw against Angola in their international friendly on Sunday at the Mbombela Stadium having won 2-1 against Mozambique last Thursday at the same venue.

When Broos took charge of Bafana Bafana last year he didn’t include ‘Mshishi’ in his team, but changed his mind in September, handing him a call-up for friendlies against Sierra Leone and Botswana.

He says Zwane’s experience is vital in his team.

BROOS ON ZWANE – HE’S VERY IMPORTANT FOR US

“The advantage with Themba Zwane is that he’s an experienced player,” Broos said after the match as per KickOff.

“In the young team we have, he’s important also and secondly, as you see the games we played with him, he’s very important for us, so he’s placed between the lines, he’s very smart.

“Most of the time with his position, he’s free, we can give him the ball, he can keep the ball, so yes he’s become very important for us.”

ALSO READ: BONGANI ZUNGU ON THE STANDARD OF PSL FOOTBALL