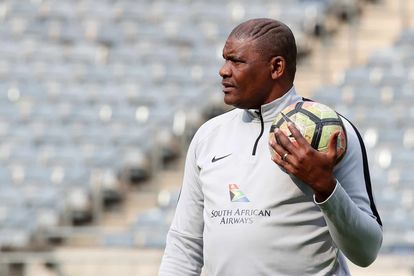 Molefi Ntseki, coach of South Africa during the 2019 International Friendly South Africa training at the Orlando Stadium, Soweto on the 05 September 2019 ©Muzi Ntombela/BackpagePix

Molefi Ntseki, coach of South Africa during the 2019 International Friendly South Africa training at the Orlando Stadium, Soweto on the 05 September 2019 ©Muzi Ntombela/BackpagePix

Bafana head coach Molefi Ntseki has reportedly refused to hand in his resignation letter following his side’s failure to qualify for AFCON 2022.

Ntseki’s Bafana fell disappointingly short in their quest to qualify for the upcoming AFCON tournament in Cameroon however it has since emerged that the head coach decided against resigning.

Ntseki’s decision despite failing the nation will likely see him face a forced exit out at SAFA according to the former SABC, SuperSport and current Metro FM anchor.

The likes of Namibia and Zambia also gave Ntseki’s side a torrid time in friendly matches during late 2020 and this has left the public urging SAFA to take immediate action against the captain of the national ship.

Today’s ‘AFCON feedback meeting’ which will be held at SAFA house will paint a better picture of the immediate future of Bafana. The conference will begin at 12:00 and this website will keep you informed of the happenings as it rolls out.