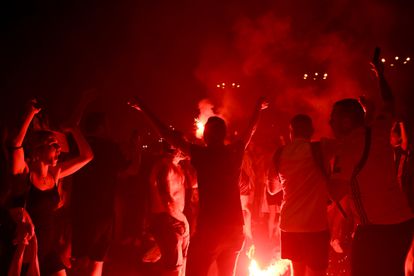 Real Madrid supporters celebrate in Cibeles square in downtown Madrid, at the end of the UEFA Champions League final football match between Liverpool and Real Madrid at the Stade de France in Saint-Denis, north of Paris, on 28 May, 2022. Photo: Gabriel BOUYS / AFP

Real Madrid supporters celebrate in Cibeles square in downtown Madrid, at the end of the UEFA Champions League final football match between Liverpool and Real Madrid at the Stade de France in Saint-Denis, north of Paris, on 28 May, 2022. Photo: Gabriel BOUYS / AFP

French police arrested dozens of people in Paris during the Champions League final between Liverpool and Real Madrid, which was marked by scenes of chaos that delayed the kick-off.

Liverpool said genuine ticket-holders had not been able to access the match due to a security breakdown while UEFA and the French authorities blamed a problem with fake tickets.

The delay to the game and the chaotic scenes outside the Stade de France in Paris — where French police used tear gas to disperse fans — was not what the French capital wanted just two years before it hosts the Olympics.

The interior ministry said 68 people had been detained, of whom 39 were placed under arrest and remanded in custody meaning they could face charges.

European football governing body UEFA blamed “fake tickets which did not work in the turnstiles” for the 35-minute delay to the final.

But Liverpool said they were “hugely disappointed” that their supporters had been subjected to an “unacceptable” breakdown of the security perimeter.

However, French Interior Minister Gerald Darmanin pointed the finger at Liverpool fans, saying “thousands of British ‘supporters’ either without tickets or with fake ones forced their way through and sometimes behaved violently towards the stewards”.

French newspaper Le Monde commented: “The party that was supposed to precede the final… was spoilt and turned into real chaos.”

‘FROM PARTY TO FIASCO’

“From party to fiasco,”

In contrast to the scenes outside the stadium, Paris police noted that proceedings at two vast fans zones hosting thousands of supporters from both sides had taken place in a good atmosphere and without major incident.

Some 40 000 Liverpool supporters without a match ticket had packed into their zone in eastern Paris to enjoy the atmosphere. Despite the disappointment of defeat they left the area without any issue.

The Paris fire brigade — which looks after all kinds of emergency situations — said the night had largely been calm although it had treated some supporters for the effects of tear gas as well as excess alcohol consumption.