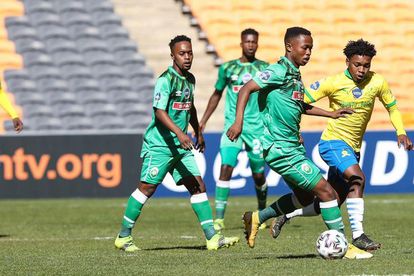 AmaZulu and Mamelodi Sundowns battle in the Diski Challenge Rewired finals at the FNB Stadium.

AmaZulu and Mamelodi Sundowns battle in the Diski Challenge Rewired finals at the FNB Stadium.

AmaZulu were crowned champions after beating favourites Mamelodi Sundowns 2-0 at the FNB Stadium on Sunday.

The two teams battled out in the Diski Challenge Rewired finals, and Usuthu were considered the underdogs going into the encounter.

AmaZulu opened the scoring through Lindani Shenge who was unmarked inside the box before firing his team ahead after 28 minutes.

Usuthu headed into dressing rooms for half-time with their tails up as they were leading and in control of the game.

AmaZulu were awarded a penalty in the 68th minute after Msindisi Ndlovu was fouled by Mohlala Makola inside the Sundowns box.

Sandile Khumalo stepped up and made no mistake from the spot to extend AmaZulu’s lead and put the game to bed.

Ayanda Dlamini’s boys held on to their lead to eventually claim a 2-0 win over Sundowns, and be crowned champions.

AmaZulu are the second coastal side to win the Diski Challenge crown after Golden Arrows last season.

Usuthu’s Msindisi Ndlovu was named man of the match, and he walked away with a R2000 voucher.