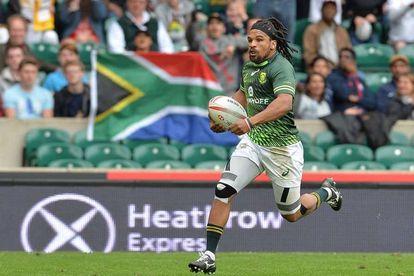 LONDON, ENGLAND – MAY 22: Rosko Specman of South Africa during the cup final match between South Africa and Scotland on day 2 of the HSBC World Rugby Sevens Series London at Twickenham Stadium on May 22 in London, South Africa.

LONDON, ENGLAND – MAY 22: Rosko Specman of South Africa during the cup final match between South Africa and Scotland on day 2 of the HSBC World Rugby Sevens Series London at Twickenham Stadium on May 22 in London, South Africa.

In the lead up to the London Sevens World Rugby released a raft of statistics which show that sevens is in great health – and boosting rugby as a whole. Top-line findings include: rugby participation figures (for men, women, and children) are now at the unprecedented level of 8.5 million (770,000 more than 12 months ago); and the oval-ball game has an estimated 300 million supporters across the globe.

With projected figures for Paris and London, the Sevens Series has generated a total attendance of more than 733,000 this term – that’s seven per cent more than the 2015-16 season – and sell-out crowds have been achieved in Dubai, Sydney, Cape Town, Vancouver and Hong Kong. Impressively, the competition has a geographic reach that now extends to more than 200 countries and regions, with World Rugby and title sponsors HSBC looking to take the game to more and more audiences.

England captain Tom Mitchell told TheSouthAfrican.com that the Blitzboks “deserve all the success they have had” after finishing runners up in the last four of the Sevens Series campaigns. The playmaker said: “South Africa have produced an unbelievable season. I know how difficult it is to maintain that level of performance and be at the top for that long. It is truly remarkable. And I have to say it is easy to be complementary about that group because they are great players and great guys, too. They deserve all the success they have had.”

On the eve of the season-ending London Sevens England are second in the overall table behind champions South Africa, and a decent showing by the hosts should give Mitchell’s country a best finish since 2006 (when they ended runners up). “It’s been a good season,” says Mitchell, “and there is a huge motivation for us going in to this weekend – not only in the context of the series, and wanting to finish second, but we want to do well in our home tournament.”

At the top of the try-scoring charts is American flyer Perry Baker, with 49. Four behind him is England’s Dan Norton – and if he is at his best there is every chance his country will indeed go all the way at Twickenham. The 29-year-old is not lacking in form and confidence and last month in Hong Kong he better Kenyan Collins Injera’s world-record mark of 244 tries. Can Norton catch Baker?

A lucky 180 or so fans at Twickenham will be able to test out the Samsung Slider, a unique – and seldom seen – four-person mobile seating unit that travels up and down alongside the pitch on an 80-metre custom-built track at speeds of up to 20mph. Look out for it on the sidelines at England’s rugby HQ.

There have been eight different winners in the last nine editions of the London Sevens (only New Zealand have won twice in that time). The 2016 final proved the most surprising of the lot: Scotland won a maiden Sevens Series title, defeating South Africa. With 30 seconds remaining the Scots were down 26-15, and defeat looked certain. But Edinburgh winger Dougie Fife had other ideas, and contrived to carve his name into sevens folklore by scoring two tries (the second in added time) to help his country grab a sensational 27-26 win.