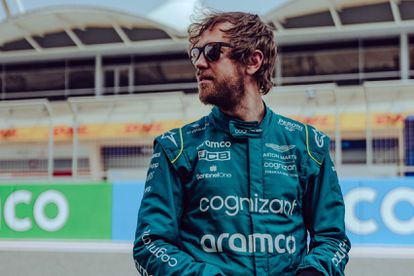 Sebastian Vettel was fined €5 000 (R80 000) on Friday after riding a moped on the track at the Australian Grand Prix in violation of the rules, as his season went from bad to worse.

The four-time world champion jumped on a scooter to make his way back to the paddock after abandoning his broken down Aston Martin, which had smoke belching from the rear, in the first practice session at Albert Park.

The 34-year-old German was seen casually driving around the track, smiling and waving to fans, after the other cars had returned to the pits.

At one point he took his hands off the handlebars.

“This is the most iconic end to a practice session we can remember,” Formula One’s official Twitter account posted.

However, governing body the FIA took a dim view and found him in breach of sporting regulations “which prohibit anyone from being on the track in the five-minute period after the end of a session, with the exception of specifically identified personnel.”

It was not the start to the weekend that Vettel wanted after missing the opening two races of the season with Covid-19.

Sebastian Vettel then failed to appear for the second practice, with his team tweeting that his “car will not be ready to run”, in a fresh setback for the three-time Melbourne champion.

“It was a shame to have to finish FP1 earlier than we would have liked – and then not be able to take part in FP2 – because today was an important day for me in terms of getting back up to speed with the car and learning a new layout,” he said.

“The positives are that I felt I was able to get comfortable quite quickly and that we had a good balance in the car, too.

“It is a shame, however, not to have completed more laps, but it was a power unit issue and that meant we had to replace it.”

SEBASTIAN VETTEL’S CAR SHOULD BE FINE FOR QUALIFYING

The car is expected to be fine for Saturday’s third practice and qualifying, he added.