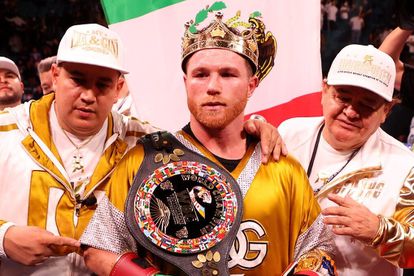 Saul ‘Canelo’ Alvarez made history on Saturday, knocking out Caleb Plant in the 11th round to become the first undisputed world super middleweight champion, unifying all four major belts in less than 12 months.

The 31-year-old added the IBF belt to his WBC, WBA and WBO straps in a winner-takes-all showdown at the MGM Grand Hotel in Las Vegas to join an exclusive club.

Mexico’s Alvarez knocked Plant down twice in the 11th; the first time with a stinging left hook, followed up by a thundering right uppercut.

Plant got up but the American was still wobbly and in a fog as Alvarez chased him around the ring.

Alvarez pummelled Plant with rights and lefts to drop him for good at 1:05 of the round.

The Mexican had seized the WBA and WBC titles by defeating Callum Smith in December 2020.

He defended them successfully by overpowering Avni Yildirim in February and then clobbered Billy Joe Saunders six months ago to grab the WBO belt.

Alvarez came into the bout as a heavy favorite to become the first Mexican four-belt champion.

With a complete collection of 168-pound titles, he becomes just the sixth fighter since the WBO began sanctioning world title fights in 1988 to hold all four belts from the separate governing bodies at the same time.

“It hasn’t been easy to get to this point,” Alvarez said.

“With my team I have gone really far.

“This is for everybody, especially for Mexico. We did it tonight. We are only six. It keeps me happy and motivated to be one of the six undisputed fighters in the world.”

Even though Plant was fighting in his home country, he was booed during the introductions as the majority of the Las Vegas crowd was cheering for Alvarez throughout the fight.

Alvarez won just about every round leading up to the 11th but still Plant proved to be an awkward opponent. Alvarez needed a spectacular KO to put a stamp on what up until then had been a mediocre performance.

Both fighters used the first round to feel each other out. They stuck to their game plans in the second round with Alvarez landing left hooks to the head and Plant sneaking in a few jabs.

Plant lost all but one round in the first half of the fight but he did a good job of staying out of trouble, slipping punches and weathering the coming storm. By the sixth round Plant’s jab had lost some of its snap as his lack of power started to show.

Alvarez was warned for a low blow in the fifth but he also landed one of his best left hooks in the round right on the button that hurt Plant. He grew more confident as he started to realize that Plant couldn’t hurt him with his now pawing punches.

In the 10th round, Plant got more careless and his jab completely disappeared. He tried to fight in close but couldn’t get through Alvarez’s stingy defence.

Halfway through the 11th Alvarez caught Plant with a vicious left hook and then followed it up right away with a right uppercut as Plant was going down.

Plant rose but it was clear the end was near. After a brief conversation with the referee the fight continued and Alvarez could smell blood. He went on the attack, charging forward and swarming Plant with a flurry of rights and lefts, finally putting on the finishing touches with a straight right to the head.

Alvarez said Plant, 29, wanted to keep going but he told him he should stop.

“He wanted to continue. I told him there is no shame. Of course I came out on top,” said Alvarez.