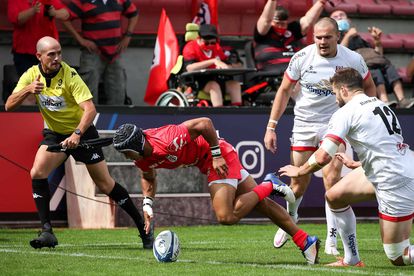 Springbok Rugby World Cup-winner Cheslin Kolbe said he was stunned by his own ability after scoring twice as Toulouse started their European Champions Cup campaign with a 29-22 victory at Ulster on Friday.

Kolbe crossed in superb fashion either side of the break as he took his tally to 10 tries in as many games since the sport’s restart in September.

For Ulster, it was a first loss at their Kingspan Stadium since October 2018.

“There are not a lot of teams that come here and get a win. I think we can take a lot of confidence from this and keep on building,” Kolbe told BT Sport.

“To be honest, I surprise myself and I just think it’s my body that just takes over.

“It’s not about me, it’s about the team and the forwards who lay the foundation for us backline players to give us opportunities to finish them off,” he added.

The hosts’ coach Dan McFarland made five changes from their PRO14 hammering of Edinburgh two weeks ago as hooker Rob Herring and three-quarter Jacob Stockdale returned from Ireland duty.

Mola’s side responded immediately as Kolbe chipped and chased to finish from 50 metres in a sublime individual effort as he beat three defenders.

The joint-four time record winners led 14-12 at the break as Antoine Dupont broke from halfway and sold opposition fullback Michael Lowry a dummy to slide over.

The home team dominated after the interval as scrumhalf John Cooney kicked a penalty and Herring added a second either side of 2.13-metre Arnold’s first try of the season for a 22-21 lead with a quarter of an hour to play.

Kolbe’s second moment of brilliance came as the former Stormers winger received the ball on the touchline.

He sidestepped Stockdale within centimetres of the whitewash and then found his way through for a try despite falling to all fours.

Thomas Ramos made up for the missed conversion with a 50-metre penalty goal to seal the win and a repeat result of last season’s quarter-final.