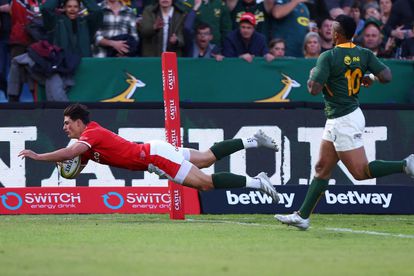 This try by wing Louis Rees-Zammit has been nominated for World Rugby Try of the Year. Image: Reuters.

This try by wing Louis Rees-Zammit has been nominated for World Rugby Try of the Year. Image: Reuters.

Wales wing Louis Rees-Zammit’s scintillating try against the Springboks is one of five Test tries featuring on World Rugby’s list of nominees for the 2022 Try of the Year award.

Selected by the star-studded World Rugby Awards panels, nominees in nine categories were announced throughout this week on World Rugby social media channels (@WorldRugby) and the World Rugby Media Zone.

ALSO READ: Lukhanyo Am nominated for World Rugby Player of the Year

Fans can cast their vote and select the winner in the Men’s Try of the Year category until Thursday, 17 November.

Four of the nominees in this cagetory are counter-attacking tries that started deep inside the attacking team’s own half and one example of pure pace.

Watch the World Rugby Try of the Year nominees here:

Rees-Zammit used his acceleration to leave the Springbok defence trailing in his wake.

Edoardo Padovani touched down for the Azzurri against Wales following a scintillating break from Ange Capuozzo.

Chris Harris finished off a fine team counter-attack for Scotland against Italy in the Six Nations.

Lalakai Foketi finished off a masterful Australian try against France with an effort that began in their own 22, forwards and backs combined to show pace and skill to score a 90m wonder try.

Chile flyhalf Rodrigo Fernandez picked up the ball just outside his 22 and then scuttled past six USA defenders before reaching the line, a feat made all the more implausible by the incredibly wet conditions.

Some of other categories to be awarded on Sunday are the World Rugby World Rugby Referee Award, World Rugby Coach of the Year, Vernon Pugh Award for Distinguished Service and the popular Men’s and Women’s 15s Dream Teams of the Year in partnership with Capgemini.

The prestigious awards for 2022 will be presented in Monaco on Sunday, 20 November.