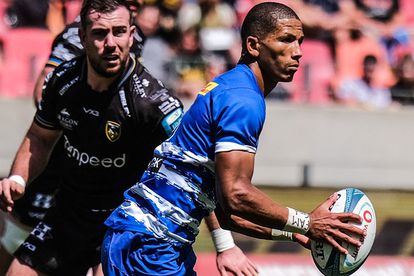 It was a perfect round for the four South African teams in the United Rugby Championship (URC) as the competition reached the halfway stage, with the local teams proving too strong for their Welsh visitors on a weekend that delivered 26 tries in the Republic.

The Sharks – bolstered by a bunch of returning Springboks – bounced back from last weekend’s defeat and subsequent coaching changes to beat the Ospreys 25-10 in Durban on Friday night.

On Saturday, the Stormers played a home game in the Eastern Cape and outlasted the Dragons with a bonus-point 34-26 victory, but the Capetonians would not have been too happy with conceding four tries themselves, although Springbok flyhalf Manie Libbok was in sublime form and scored half of their points.

VIDEO | MANIE LIBBOK MAGIC: IS THIS THE TRY OF THE SEASON?

The Bulls were too strong for Cardiff in the second game on Saturday and scored six tries without reply as they won 45-9, with Springbok speedster Canan Moodie crossing for two tries, and on Sunday, the Lions leap-frogged four teams to fifth on the log with their bonus-point win over the Scarlets on a hot afternoon in Johannesburg.

Table-topping Leinster’s victory over Ulster on Saturday meant that the Bulls and Stormers moved up to second and third spots on the standings, while the Lions and Sharks also moved up.

Leinster’s perfect record from nine games see them top the log on 43 points, followed by the Bulls (34 from nine) and Stormers (34 from eight), while Ulster (31 from eight) are in fourth.

In fifth position, the Lions (24 from eight) are still firmly in the race for the top eight, while the Sharks are in 10th spot (19 from seven). Edinburgh (23 from nine), Cardiff (22 from nine), Munster (22 from nine) and Glasgow Warriors (20 from eight) lead the Durbanites on the log, while Connacht and Benetton (both on 19 from nine) are not far behind.

The Sharks, fielding a new-look side after their big defeat against Cardiff last weekend, beat the Ospreys 25-10 in their United Rugby Championship clash at Hollywoodbets Kings Park in Durban on Friday night.

Fourteen of the KwaZulu-Natalians’ points were earned from two converted tries in the last seven minutes.

The Stormers outlasted the Dragons 34-26 in a thrilling United Rugby Championship contest at the Nelson Mandela Bay Stadium on Saturday, earning them their sixth win in eight outings this season.

The Capetonians got off to a flying start after showing glimpses of impressive attacking form in the early stages of the game and scored four tries to one in the first half, which saw them enter the break in an encouraging 28-7 lead.

The Dragons fought back with intent in the second half scoring three tries, two of which were converted, to two penalty goals by Springbok flyhalf Manie Libbok – who finished the game with a personal contribution of 17 points – but the strong start by the hosts was enough to seal them the valuable victory.

The Bulls scored six tries in their 45-9 triumph over Cardiff in their ninth-round United Rugby Championship clash at Loftus Versfeld in Pretoria on Saturday evening.

The hosts started the game looking for their fourth win on the bounce since their round-five defeat to Munster in Limerick, and Cardiff were no match for the team in the light blue jerseys playing at Fortress Loftus.

The hosts went into the half-time break with a 17-9 lead having scored two tries, one each through Springbok speedsters Canan Moodie (left wing) and Kurt-Lee Arendse (fullback), both converted by Johan Goosen (flyhalf), while the pivot also hit the mark with a penalty goal.

After the break they continued with their dominance which resulted in four more tries for a total of six for the evening, while they managed to keep the visitors scoreless in the second half with some outstanding defence. Moodie scored a brace of tries and bagged the Man of the Match accolade for a bright return to action after eight weeks.

The Lions powered up to fifth place on the United Rugby Championship standings with a second successive victory over Welsh opposition, cruising to a 32-15 victory (half-time 18-5) over the Scarlets on a scorching Sunday afternoon in Johannesburg.

They leapfrogged four places with their bonus point, four-try to three win, following last week’s 33-25 victory over the Dragons.

In the thin-aired, roasting atmosphere of a highveld summer afternoon the Lions had too much pace, power and sheer cussedness for a wilting Scarlets team who never gave up but lacked the extra gear to overcome the home team.