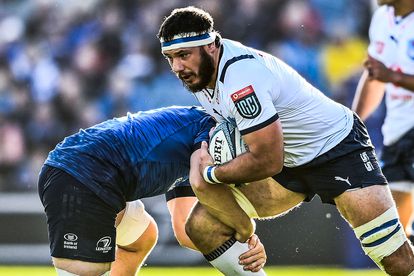 The Lions and Stormers flew the South African flag on a weekend where the local teams’ stranglehold on the United Rugby Championship was broken as the Sharks and Bulls came up short on the road.

The teams from Johannesburg and Cape Town were full value for their victories in Edinburgh and Parma respectively, but the men from Pretoria and Durban came up second best in their clashes in Glasgow and Dublin.

PICTURES | EBEN ETZEBETH ARRIVES AT SHARKS AHEAD OF DEBUT

The first South African team in action over the weekend, the Lions, completed their three-match tour with a superb 22-19 victory over Edinburgh in the Scottish capital on Friday evening, ensuring they return to Johannesburg with three wins from as many games on the road in the north.

In Saturday’s first game, the Stormers grabbed a third successive victory to remain unbeaten so far in this season as they beat Zebre Parma by 37-20 in northern Italy, with Junior Springbok captain Sacha Mngomezulu scoring 22 points for the Capetonians.

However, the Sharks and Bulls were dealt their first defeats of the season thereafter.

The Durbanites were beaten 54-34 in a high-scoring affair by Irish giants Leinster in Dublin on Saturday evening, after which last season’s runners up from Pretoria came up short by 35-21 against a fired-up Glasgow Warriors in Scotland.

With one match to go in the round – on Sunday afternoon in Treviso, where Benetton host the Dragons at 15h45 – the South African teams are still in the top-eight on the log.

The Glasgow Warriors produced a superb performance on attack and defence against the Bulls in their United Rugby Championship clash at the Scotstoun Stadium in Glasgow on Saturday to outscore the visitors by five tries to three for a well-deserved 35-21 victory.

The win marked the hosts’ second in as many games at home this season, while it ended the Pretoria outfit’s three-match unbeaten run.

The big difference between the teams in the first half was the Warriors’ ability to use their try-scoring chances, which saw them snatch four tries for their bonus point, while they limited the Bulls to one converted try by Kurt-Lee Arendse.

The visitors outscored their hosts by two tries to one in a tightly contested second half in which both sides also received yellow cards, but the Glasgow Warriors’ strong first-half showing was enough to seal the rewarding victory.

United Rugby Championship log-leaders Leinster produced a stunning second-half flourish in their fourth-round clash against the Sharks in Dublin on Saturday to secure a 54-34 victory, which saw the Durban side suffer their first defeat in the competition this season.

The first half was gripping with both sides scoring three tries, but Leinster’s three conversions to one conversion and a penalty goal by the Sharks saw the hosts enter the sheds with a narrow 21-20 lead.

Leinster hit their straps in full force in the second half, scoring five tries to two by the visitors – which marked fullback Aphelele Fassi and wing Thaakir Abrahams’ braces – as their accurate execution and a red card in the dying minutes for Sharks centre Rohan Janse van Rensburg for a dangerous tackle, allowed the hosts to walk away with the convincing victory.

Defending champions, the Stormers, continued with their winning start to the new season when they defeated Zebre Parma 37-20 in their fourth-round United Rugby Championship encounter in Italy on Saturday afternoon.

The Cape outfit won both their opening fixtures on home soil and have now added a first, bonus-point victory on the road in the Northern Hemisphere to their title defence.

Junior Springbok captain Sacha Mngomezulu, normally a flyhalf but playing inside centre on this occasion, delivered a polished display and contributed 22 points to the Stormers’ deserved triumph via a try, four conversions and three penalty goals.

The Lions showed plenty of guts against a strong Edinburgh side to win their third consecutive United Rugby Championship tour match in the Northern Hemisphere by 22-19 in the Scottish capital on Friday evening.

The two teams went into the halftime break level at 5-5 after each scored an unconverted try, however, the match opened up after the break with both sides using their kicking game to gain field possession and then the driving maul to put points on the board.

Both sides scored three tries apiece, but it was the Lions who clinched the match with a Gianni Lombard penalty goal near the end. However, the red and white jerseys could have bagged an easier victory had it not been for some wayward goalkicking earlier in the encounter.

Nigerian ex-senator on trial in Britain for alleged organ harvesting

Deadline day: Could Chiefs or Pirates swoop for this top player?