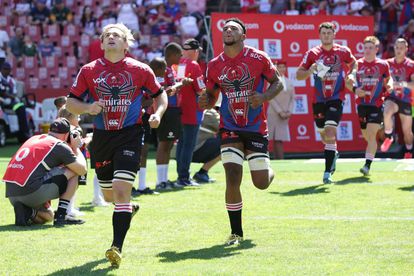 Lions players entering the field during the 2020 Super Rugby match between Lions and Stormers at Ellis Park Stadium, Johannesburg on 15 February 2020 ©Samuel Shivambu/BackpagePix

Lions players entering the field during the 2020 Super Rugby match between Lions and Stormers at Ellis Park Stadium, Johannesburg on 15 February 2020 ©Samuel Shivambu/BackpagePix

The Lions will, like the Bulls, self-isolate for 14 days as a measure to combat the spread of the coronavirus pandemic.

Both teams’ Australasian tours were cut short after the Super Rugby season was suspended indefinitely.

Following Friday’s defeat to the Blues in Auckland, the Lions landed in South Africa on Sunday, and the players and staff will immediately go under self-isolation, according to chief executive, Rudolf Straeuli.

“It is difficult circumstances, but people’s health come first,” he said. “Sanzaar is in ongoing discussions with broadcasters and have been keeping everyone informed of the decisions. The situation will be reviewed on an on-going basis.”

Sanzaar announced on Saturday that it would suspend Super Rugby, following travel bans implemented by the New Zealand government in the wake of the pandemic.

The Bulls, who were in action just before the announcement, are due back on Monday, and will also go under self-isolation, with Loftus Versfeld set to close up shop until further notice.

“Following Sanzaar’s announcement of the Vodacom Super Rugby tournament being suspended, we can confirm that the Vodacom Bulls team will be returning to South Africa and are expected to touch down on Monday evening,” a Bulls statement said.

“The entire touring group will go into self-isolation for 14 days. BBCo management has also urged all the other players (Juniors and SuperSport Rugby Challenge) not to report to Loftus for regular duty until further notice. The welfare and safety of our players and the public is our first priority and we will abide with the relative governing bodies and authorities.”

How rugby has been impacted by the coronavirus

Super Rugby was the latest major rugby competition to be placed on hold due to the virus, with the Six Nations and Pro14 also postponing upcoming fixtures.

The competition – which features top teams from the southern hemisphere as well as Japan – was only in its seventh week before it was suspended.

Japan’s Sunwolves were the first team to be dealt a telling blow by the coronavirus, as they had to host their home matches outside Asia, their most recent taking place in Brisbane on Saturday.

Elsewhere, 2019 Super Rugby runners-up the Jaguares were initially set to play their match against the Jaguares behind closed doors, but the game was subsequently postponed.

The Sharks lead the overall standings in the competition after beating the Stormers at Kings Park on Saturday.