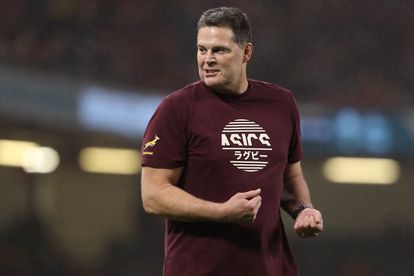 Rassie Erasmus’ conduct has made South Africa “so easy to dislike”, according to Springbok great John Smit.

Erasmus, South Africa’s director of rugby, has been given a two-game matchday ban by World Rugby following his criticism of refereeing decisions during the ongoing Autumn Nations Series on social media.

As a result, Erasmus missed the Springboks’ 63-21 win over Italy in Genoa last weekend and the 50-year-old, who guided South Africa to 2019 World Cup glory, won’t be at Twickenham for Saturday’s match against England.

Rassie Erasmus only recently back from ban

The 2007 World Cup-winning captain added: “The way he has approached this is not right. Are you telling me Rassie is the only coach frustrated by a call that has gone the wrong way?

“Something has to be done. There has to be a line that has to be drawn, and he is making it difficult for his team. It’s made us, as a rugby team, so easy to dislike.”

That did not stop Erasmus from publishing several videos on social media that appeared to question decisions made by referee Wayne Barnes during the Springboks’ recent 30-26 loss to France on November 12.

He had made similar comments on social media following South Africa’s defeat by Ireland a week earlier.

Erasmus said accusations that his videos had led to threats against experienced English referee Barnes were “completely unfounded”.

But there is a growing belief among officials that Erasmus’s comments have encouraged angry supporters to make vitriolic posts of their own towards referees and their families.

World Rugby chief executive Alan Gilpin said the global governing body had to act against Erasmus for the safety of referees at all levels.

“That’s the really important thing in terms of the integrity of the game.”