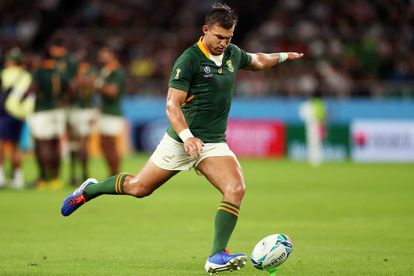 South Africa’s 1995 Rugby World Cup hero Joel Stransky is excited to see Springbok pivot Handre Pollard join Leicester Tigers after being restricted by the Springbok game plan that “he must be hating”.

Former flyhalf Joel Stransky is no stranger to Leicester Tigers having made 73 appearances for the English side during the late 1990s.

According to the Planet Rugby website, Stransky is convinced the move to Leicester will be beneficial to Handre Pollard’s game.

MUST READ | HOW ‘THE ARCH’ HELPED ‘BEAST’ WITH HIS SA PASSPORT

“I think when he gets to the Tigers he will hopefully be given the opportunity to go and blossom again,” Joel Stransky told the Leicester Mercury.

“He’s such a really cool young man, with so much talent. I think he will flourish at Leicester. It’s a club that really embraces the players, the people, it’s a community that embraces the club and its player.

“I think the Springboks have evolved to a game-plan that is great with where the laws of the game are, it’s great for the makeup of our team. There’s two ways to pick your team and ours is very much about picking the biggest, strongest pack of forwards we can and some speedy backs and then we play a game plan that is forward dominated. It doesn’t give too much control or influence to the number ten.

“As much as in his early days he shone and was outstanding, in the last two or three seasons, I would guess, if you were to have a quiet conversation with him, completely off the record, I would guess that his work satisfaction levels are quite low.

“He has got an amazing skill set. He’s a little bit bigger than most flyhalves. He attacks the gain line, he’s nimble, he’s strong, he’s got a great offload game. He reads the game well when he’s given the authority to read it. His kicking game is really solid. He’s a really complete footballer. He just plays in a team where the success of that team is based on a game plan that doesn’t suit him.

“I think he has the worst job satisfaction in the world as a rugby player at the moment. He must be hating playing in a game plan where he doesn’t get the ball, where he’s not in control.

“There’s no opportunity to run at defensive lines and do backline moves and free up the likes of Damian de Allende and Lukhanyo Am. To stand there and watch the scrumhalf kick 90 percent of the ball away, he must be wanting to pull his hair out and vomit on the field.”

“I think for him [joining Leicester] is an opportunity to go and play rugby at a rugby club in a rugby city in a rugby environment, where he will be loved and respected and he can hopefully, under the coaching team at Tigers who are doing an unbelievable job, play a game plan that really suits him.”